I’ve been nominated for a Spirit Animal Award! This is an awesome idea!

The rules for the Spirit Animal Award:

Woo. 10 is a lot. I read a decent number of stories, but a lot of them have already been nominated. I’ll see what I can do.

Thanks so much to Shannon Simsfan of Simdale Valley Post and Kate of the Loewe Legacy!

Shannon’s work includes a legacy called Take Me to the Moon about the Tesla family and a round-robin neighborhood story of Simdale Valley. Shannon captures the personalities of the Teslas beautifully, and I find Simdale Valley kind of awe-inspiring. I don’t think I could track all the lives of an entire town the way she does. But I really relate to the fact that she converted the entire neighborhood from Sims 2 so that she could continue the story. This is exactly what I would do 🙂 :).

Kate has built an intricate story about the Loewe family, filled with adventure, intrigue, adventure, and mystery. The spares get almost as much attention as the heir. I never know what direction her story will take, and I’m eager to find out.

I played The Sims and The Sims 2 obsessively, round the clock, foregoing sleep, for about a month each. In both cases, I somehow wanted the game to be something that it wasn’t, but I couldn’t have told you exactly what it was.

In The Sims 3, I found that game. I have been playing since January 2009 with a year-long break to have a baby.

That’s 6.5 years and counting, which doesn’t stand out much as members of the Sims community go. I think what makes me distinctive as a Sims player is that I’m still playing — and blogging — the SAME LEGACY. My foundress, who I named Susie Sample as a gag, was the first sim I created just to see how the game worked. I became so attached to her that she started a legacy, and that’s why my legacy has the bizarre family name of “Sample.”

In real life, I am a 40-year-old unemployed (hopefully for not much longer) software engineer. I am happily married to another software engineer, and we have an awesome 5-year-old daughter. When I’m not playing the game or blogging, you can usually find me wandering aimlessly across the blogosphere, offering unsolicited tech support. This is such an awesome but miserably finicky game, and I want to do my part to save people from banging their head against it.

Here, I’m picking a spirit animal for my Sims life, not necessarily the rest of my life :).

Echo Weaver the simmer is an Elephant. 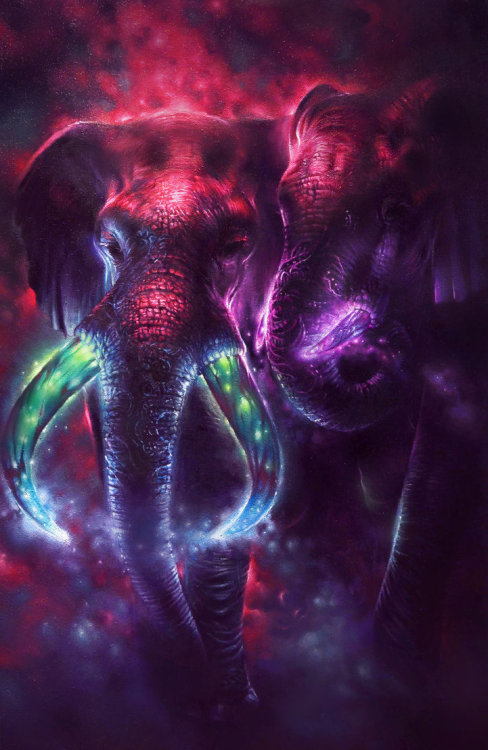 I’m an elephant because an elephant never forgets. I don’t give up on my sims ever. I have dozens of backups of my game files on an external server so that, knock on wood, I will never be faced with a loss of my families. I have backups going back to the very beginning, when Susie was still alive, in case I want any sims or objects from them.

If, heaven forbid, I ever lost all my backups, I’d recreate my family and neighborhood as close I could, and keep going. I just don’t give up.

I’m stubborn. Rather than give them up, I have made the Samples into whatever I want to be playing. They started out in Sunset Valley and now live on a supernatural island where everyone has pointed ears and metallic skin. The story justifications may be thin, but they’ve been fun. I love my characters, but I also REFUSE to give up on a 10-generation legacy once I have started it.

I think 7 is the best I can do for folks who I don’t know have already participated.

It’s been a stressful month, so I stopped writing AND reading. I’m in a long, ugly job hunt, I’ve had some health issues, and I have learned definitively that our family stops at one child. It’s been hard to stay positive.

I’m catching up on my reading list a little bit at a time. You guys are all awesome.

Recently, I have been catching up on my ISBI, We’re All Mad Here, which I neglected for too long. It’s starting a new torch holder, picking a new mate, and about to choose a new world to move to. Feel free to check it out if you’re into ISBIs.

The Wonderlands are also a more gentle return to simblogging because everyone is Insane! Nothing actually has to make sense.

The Samples are back in focus now. My first post will be for a spirit animal!

In the month of February, I:

If you tried to load my venerable Blogspot blog and found yourself here, apologies for the confusion.

Over the last…. year? Maybe? It might not be that long… my Sims blogging friends have been referencing comments they left on my blog that I’d never seen. Then I started getting a handful of test comments of the flavor, “Hey, is it working this time?”

The straw on the camel’s back was chat on Gryffindork’s blog, where she mentioned that she’d tried to leave several comments that didn’t seem to have appeared. She did some testing at my request and it looks like there was a MAJOR problem with comments being dropped. I don’t know how many comments failed to make it to my blog(s), but the implications are staggering (where “staggering” must be relative to the number of comments you’d expect on a fiction blog about a video game).

I spent this week converting all three of my Sims blogs to self-hosted WordPress. This has been a surprisingly emotional transition. I started Sims blogging on Blogspot at the beginning of 2010. I like Blogger. Plus, I was really afraid of losing my absurdly long archive or even one precious comment. I was super cautious, but it turns out there are very good plugins for this.

So, if you’ve tried to comment in the past and couldn’t figure out what happened to your comment, please try again.