Connery loved his life. He had Dylan and Andria and the kids in the house he’d always known, and across the street he had a new home with Abby and Chaim. He belonged to everyone.

Prom night arrived. Edmund spent many an evening agonizing over who he might ask to be his date, and eventually he gave up. He kept to himself too much to have a sense of the girls in his class.

He couldn’t resist a chance to dress to the nines, however.

He began the evening in high spirits. The gym was decorated beautifully. He was proud of his formals. The music made him want to dance, which was a feat in itself.

The evening turned out to be more…. physical than he expected.

“Accidental” elbows to the gut as he tried to dance, “accidental” punch splashed on his suit.

Once, in a press of bodies on the dance floor, someone punched him. He never even knew who did it.

He was getting the distinct impression that he wasn’t welcome at his own prom.

He eventually found himself holding up a wall, brooding at the people dancing and having fun.

He began to notice he wasn’t the only one taking shelter away from the action. Another student took a place against the wall nearby.

“This sure is a lot of people,” Joy Reacher observed flatly.

“Yeah,” Edmund agreed. “And apparently most of them hate me.”

Joy looked at him in genuine surprise. “Why would anyone hate you?” she asked. “You’re one of the only interesting guys at this school.”

“Sure,” Joy said. “Most high school guys are so shallow, but you really see the dark depths of things.”

“Um,” Edmund said, really seeing Joy for the first time. “Would you mind, I mean would like it it I got you some punch?”

The second half of prom night was a lot more fun than the first half. Edmund and Joy gave up dancing, retreated to a corner with their punch and wiled away the time talking about existentialist philosophers. They had been sitting next to each other all term in math class, and he had no idea they had so much in common!

When it was time to leave, Edmund had Joy’s phone number and an entirely new attitude.

When someone tried to mess with him at the exit, he wasn’t above using his magical skills to give as good as he got.

(OK, let’s just assume a little artistic license on all those fights ;-). )

Victoria took her last ballet class. She tried. She really did. But she just couldn’t find the passion for it that Winston had. It was time to try something else.

She apologized to her teacher and enrolled in shop class instead.
The day Sawyer had been waiting for finally arrived.

His article “Neurophysiology of Plant-based Sentient Life Forms” was accepted to the Journal of Simazing Science. It was the most prestigious scientific journal in the Simworld. He’d finally arrived. He was a World-Renowned Surgeon. 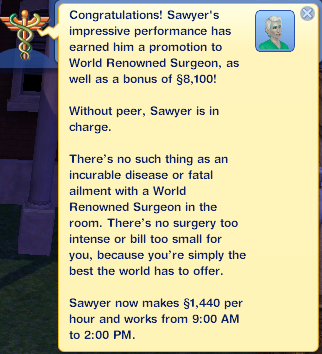 He didn’t go straight home to the Sample Estate. He had other plans. Those plans took him to Camelot.

His final offer was accepted. He left the castle that night with the deed to a new property.

The next morning, he found Victoria and Gamora in their room, discussing something to do with freshwater aquatic life. Or maybe it was life on a boat in a lake. He wasn’t really listening.

“Gamora, I’d like to speak with you alone for a moment,” he said.

Victoria was immediately worried. “What? Is there something wrong, Uncle Sawyer?”

Gamora shook her head. “Don’t worry, Vickie. When something’s wrong with Dad, he yells. This has to be a good thing.”

“I have good news,” Sawyer said. “We’re moving today. I found us a suitable home.”

“What?” Gamora demanded. “I thought we had a suitable home! What’s wrong with the one we have?”

“I think I can judge what’s good for my own intellect,” Gamora retorted. “Where do you think you’re moving us?”

Sawyer gave her the address.

“Precisely,” Sawyer said. “I didn’t see a need for our private home to be on the other side of the island.”

Gamora’s expression changed immediately “Well, why didn’t you say so?” she said. “I want my own room!”

“That was a selection criterion,” Sawyer said, looking vaguely affronted. “I’ll take you on a tour of the home, and we can assign bedrooms.”

Compared to the primary Sample Estate, Sawyer and Gamora’s new home was a quaint little cottage.

Across the street, Chaim kept an eye on the house. His house was across the street from Dylan and Andria’s. Now the Sample clan owned the whole street. He had a special motivation to keep this area safe and crime-free.

But it had space for the important things in life:

A science lab, along with a separate office with a computer.

A living room with a home theater, and a kitchen/dining space.

“So this is it,” Gamora said, looking around at their new home.

“What do we do now?” Gamora asked.

“I think I should make us a meal,” Sawyer said.
Gamora let him cook for her — macaroni and cheese from a box — without reminding him that she didn’t eat human food.

She even ate it. It wouldn’t provide any nourishment, but it wouldn’t do her any harm either. He was so proud of taking the role of providing father that she couldn’t bear to affront his ego.

Afterward, Sawyer showed her to her new room. It was simple, but comfortable. She’d do some redecorating in the morning. For now, she just reveled in having a space that need not ever be invaded by another child.

Sawyer sat up in his new bedroom, reading his new article in Simazing Science for the fourteenth time. He always felt proud of himself, but at this moment he felt content for what might be the first time in his life.

The next day, Sawyer also had plans after work. These took him someplace else entirely, someplace he would never go on his own.

Outside, Abby was waiting. She had already failed at traveling incognito.

Gamora arrived straight from school and shared some quips with Abby as they walked in together.

Then it was time to gather around the cake.

Victoria had to admit that she enjoyed being the center of attention.

(Photobomb above by Asriel Bookabet, who just keeps on living!)

While Joy Reacher collected her slice of cake –

Edmund was hiding in the lounge, trying to come up with something suave to say to her –

and Gamora was in the corner, watching his discomfort and cackling quietly.

“All right now!” Victoria shouted. “Pool time! Everyone get wet!”

There followed a lot of laughing and splashing.

Most of Victoria’s friends hadn’t had their birthday yet, so she felt a little bit like a grownup at a kid’s party, but there was swimming, so it it didn’t really matter.

Gamora got as far away from the rest of the kids as possible, which ironically was in the nursery room.

“Hi! Joy! I’m so glad you came!” Edmund said, the words coming out just a little too quickly.

“Hi!” Joy echoed. “This is such a nice party. It was so nice of Vickie to invite me!”

“Well, I kind of asked her if she would,” Edmund admitted.

Joy lit up the room with her smile. “Thank you for thinking of me.”

“Say, I was thinking,” Edmund said. “Do you think you’d be free this week to, I don’t know, go somewhere together? Maybe has a, uh date?”

He put on his best, suave, romantic face.

“I think that would be great!” Joy said. “What do you think about this weekend?”

Edmund was overcome by relief and excitement. He and Joy locked gazes, and suddenly he was pulling her into a tender hug.

Edmund pushed Joy away like a hot potato. “Hi Dad,” he said.

Mason James shot to the top of the water.

“So eat this!” Victoria cried.

Meanwhile, Sawyer caught up on his medical journals.

Of course she was going to throw a pool party. Too bad that it was too cold to go to the beach.

I was pretty pleased that I was able to click, “Go Here With” (I think a feature augmented by NRaas GoHere, but I’m not sure) and get all the inactive kids into the pool. Otherwise, they just weren’t going to go there.

I bought a second residential property for the Samples. Sawyer had a Midlife Crisis wish to move to a new house, and I could see where he might want to live on his own with Gamora. Gameplay-wise, it’s been a bit of a mixed bag. Gamora ended up sleeping in the primary house a lot because I can’t send her to her actual house after curfew, even if she goes with an adult. We’ll just handwave that for story purposes :).

Vickie rolled a really WTF trait, so I made an executive decision to give her the family trait of Brave and punt her final rolled trait to her YA birthday. Now I’m kind of regretting it. Whenever I second guess a random-rolled trait, I always find a way to work it into the character after a bit of time. But I don’t remember what the trait WAS that I didn’t like. Argh. So she’s going to be a bit of an unknown in the heir poll compared to the other three.

And, hey, Edmund picked up Joy Reacher (Shannon Simsfan’s simself daughter) as a romantic interest at a really tragic and destructive prom!

I should mention that Edmund has picked up a celebrity disgrace (false accusation). I thought that his fight-ridden prom might be related to nasty rumors being passed around about him at school.

Trying to keep this pace up so we can get to the heir poll! Two more teen birthdays to go!