Edmund knew that he lived in a bubble of luxury as the scion of an old monied Avalon family. He hated it. If he allowed it, his family connections would make everything easy. He would never need to work hard for anything. Money would mean nothing.

Edmund did not want to be that person. Once he graduated from school, he intended to live on what he earned and nothing more.

He took an after school job at Avalon Memorial Gardens as an assistant undertaker. He knew he couldn’t yet earn enough to cover his room and board, but it was a good start. He could learn the value of labor while he while he was still in school.

Many sims might hesitate to work at a cemetery, but it was the perfect job for Edmund. His work was filled with reminders of mortality, but also the spirits that lingered beyond death. It was a perfect place for magic.

At the cemetery, he was first inspired to experiment with his own magic.

Edmund fought a migraine for the rest of the day. His first experiment could have gone better.

Gamora was a force for chaos in the Sample household. Sawyer was the only sim in the house unfazed by her moods.

Not only did she dislike other children, she went out of her way to cause them trouble.

Out of everyone in the home, she seemed to get along best with Connery.

Other than her father, the human sim she seemed to do best with Victoria. She seemed to like Victoria in spite of herself. Everyone liked Victoria.

Or maybe Gamora just found it useful for them to get along. They shared a bedroom, after all.

Fall came to Avalon, bringing with it falling leaves and colder breezes.

When the weekend came, it was tool cool to go to the beach. Instead, Victoria persuaded Gamora to go with her to Persephone Hot Springs.

Gamora was much more interested in the hot springs than she was in the beach anyway. The springs were fresh water. Salt water made her sick.

“Come in!” Victoria shouted. “Whoever makes the biggest splash wins!”

She made a splash that would be hard to beat.

“Splashing isn’t really my thing,” Gamora said. “I like the water, though.”

Victoria paddled around in the crystal clear water.

Gamora treaded water until she’d soaked enough in through her skin, then lay in the sun to photosynthesize.
Almost immediately, the clouds moved in, and the skies opened up.

“It’s what?” Victoria called back from the waterfall.

Victoria watched the water splash over her hands under the water, feeling baffled. Why did it even matter if it was raining?

Winston had big plans for the weekend himself. He’d been perfecting his baking skills for days, and now he was ready to show it to the world.

He prepared as  best he could that morning.

The baking report was encouraging. 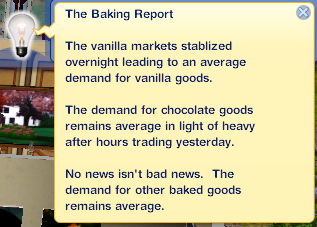 Then he ran to the town market as soon as Mom and Dad would let him out of the house.

At first, he set up shop in the old theater, Magical Moving Pictures. He thought it would be a great idea to offer an alternative to the movie concessions, but the result was disappointing. Nobody seemed to notice him. Perhaps that they were just too much competition.

He even tried outside the theater. It was out in the sunlight where he could get burned or bitten by bugs or all sorts of nastiness, but in theory it ought to increase his visibility. Still, he couldn’t attract a single sale.

Winston knew he was a good baker. Why weren’t other sims giving him a chance? Were his prices too high? Was it because he was a kid?

Finally, as the sun was beginning to set on a frustrating day, he moved his table inside the bookstore.

And that location turned out to be the jackpot.

There was no coffee stand in the bookstore, and apparently everyone was desperate for refreshments.

When it was finally time to fold up shop and head home, he eagerly counted his simoleons.

Selling treats was not as profitable as he’d thought it would be.

Here’s a little snapshot of all the Generation 7 heirs.

I’m rolling all four traits for the Gen 7 kids, just to see how it goes. The bit with Edmund wanting to earn his own money is the Frugal trait he picked up as a teen.

I suppose now is the time to admit that Gamora’s traits are…. problematic. I suppose she’s her father’s daughter. Sawyer’s Forbidden Fruit plant surprised me when it grew to Horrifying quality. I did everything I could come up with to try to raise its quality. I even moved it into the greenhouse and had Sawyer talk to it with the megaphone. No good. I could have had him harvest the fruit and let Andria plant another one with all her bonuses, but those plants take FOREVER to grow, even with fertilizer, and the resulting baby would have been a good week younger than the Gamora we have. So I let him pick her, and she came with Evil and Dislikes Children locked in. Then when I rolled her child trait, she got Hotheaded. I’ve already played the Evil sociopath in Forest, so I intend to do something different with Gamora. Gamora is going to express her Evil trait in a much milder way, more chaotic than sadistic. I’m still waiting to see how Hotheaded plays out — she hasn’t had a single Hotheaded wish yet.

Woo, those baker’s stands are really persnickety. I spent the whole day trying to figure out how to to get Winston to sell some of his baked goods. It turned out there was was some kind of glitch in the bookstore rabbithole that was causing routing problems on the lot. When I found and fixed that, suddenly Winston had customers. But I tried to have him set up that stand two other times, and nobody noticed it. I even dropped the prices for his goods very low. It’s a bummer because it seemed like just the thing Winston would want to do.

Hey, Persephone Hot Springs is still up for download, for those who might be interested. It’s the prettiest community pool lot that I’ve ever seen, and I like the idea that there’s a story excuse for using an outdoor pool in cold weather. As I was writing this, I got the impulse to learn how to use a fog emitter so that I could add some steam around the water. I’ll see how that goes. The only downside I see is that I can’t come up with a good way to add a slide.

I looked again at the traits that came with Island Paradise, and there *is* a Loves to Swim trait, which would be the opposite of Hydrophobic. I guess I’m playing Victoria as a combination of Sailor (the trait she has) and Loves to Swim. There’s just not a whole lot to sailing by itself. She doesn’t get a moodlet for being on houseboats, and the only activity you seem to be able to do from regular boats is fish. I think of Victoria as having the imaginary trait Loves the Sea, but she’ll take freshwater if that’s the best she can do.

Oh, and I finally did it. I played to all four kids are teens. Now I just have to catch up on posting so I can get the heir poll going. Can you believe it?