Andria is delighted to burn a key lime pie.

Remember how the story said that Abby and Chaim went home after Gamora’s birthday party? Well, I lied. Andria got up in the morning, and they were still wandering around the house. She had to tell them to go home.

I can’t really convey how entertaining this was in still shots, but the Pierce-Ibari family car glitched out and froze in the middle of the road with the family in it.
So keep in mind that I’m panning the camera around a motionless car and sims who are frozen in time.

They’re all in formalwear. Must have been going someplace important.

I had to reset the car, which made it vanish, dumping everyone by the roadside.
Here’s William Pierce (in the back) with his longer-term girlfriend Aminali Ibari (far right), Aminali’s son Danial (far left), and William’s daughter Cortney Pierce-Hodgins (with late girlfriend Ariel Hodgins). William and Aminal’s toddler daughter Monique must be home with Uncle Anton.

Remember that inappropriate placemat? It turned out to be the transparent clothes glitch on a weird shirt from Into the Future. So it wasn’t bad CC after all.

Here’s a fellow in the park with a really unfortunate random accessory. Shouldn’t that thing be labeled swimwear only?

I fixed him. He was grateful.

And the feeling is mutual. Sawyer got this wish at the same time as the attraction popup. 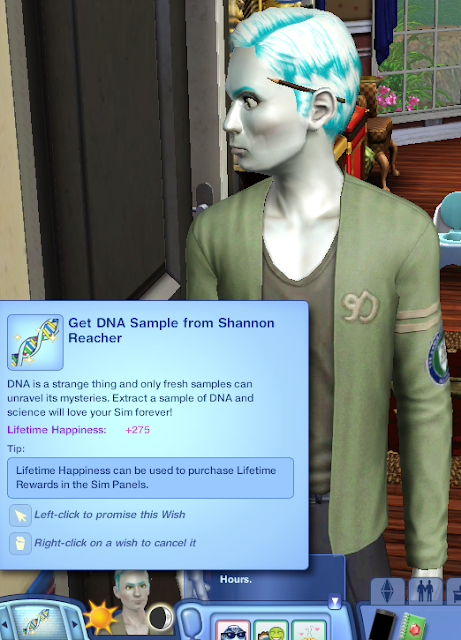 I guess they know each other because they’re coworkers.

And here’s the crowning moment in today’s Simantics.

See if THAT doesn’t give you nightmares.

Sean Flynn mounted not one, but two coup attempts against Forest. Both failed. He’s stuck as a Super Villain.

Sean was apparently pretty pissed off because he turned around and fired his own husband, Lionel. Or maybe it was Forest who fired Lionel in retribution. Since they all three live together in a menage-a-trois that we probably don’t want to know about, that must have made for some tense dinner table conversation.

Fellow criminal vampire Matt Callender-Doctor got promoted to Getaway Driver. Again, I think. That vampire is two generations old and must be the most incompetent criminal ever.

Stanley Marmalade (Xia’s son with Plum) has found love with Jody Ursine-Sample! Jody is descended from Adjo Ursine-Sample (Sample spare Generation 3). I’m not sure what generation because the townies don’t have the same need to breed and tend to lag quite a lot behind my active family. He’s at least Generation 5.

Justin Mai was jailed for failing to pay child support to Dion Callender-Doctor for their three children together. After that, he sent his payments more promptly.

Raquel Mentary-Sword passed on. She left money to three people I didn’t even know she had relationships with (Abby, William Pierce, and Aminali Ibari) but not, interestingly enough, her husband. Not sure how we should take THAT.