With the fierce filming and promotional schedule for Free World Dreams behind her, Abby was finally in a position to take some time off. She celebrated by taking Connery to the park for some quality time. Connery had stood by her and supported her when she had no time for him. A day just for him seemed like the least she could do.

While they played, Abby’s thoughts kept wandering to what Chaim had said at the beach. Was she ready to take the plunge with someone?

What if she moved in with Chaim, and the relationship worked out like all her other relationships? Let’s face it. Her track record with men wasn’t exactly encouraging. Her relationships didn’t just fail. They failed with style.

Her acting career was incredibly hard work, but at least she’d always know what her goal was. Not so much with men.

By the end of the afternoon, both Abby and Connery were exhausted, but for different reasons

As a toddler, Winston had always been a picky eater. Now that he was older, he bugged his parents until they gave him a route to experiment with his own food.

His Easy Bake oven was a creative outlet in a way that the designers had never intended.

Of course, most of his experiments tasted terrible. But that was just the path to greatness.

And somehow all his experiments, even the worst ones, were eaten.

“You know the problem with video games?” he told his mother. “Too much sitting around. I need to get up and move.”

Andria looked at him sideways. “Well, yes, that’s what I’ve been trying say. You shouldn’t keep yourself cooped up in the house all day.”

Winston made a face. “Oh, I don’t want to go outdoors,” he said. “I have a much better idea than that.”

His idea turned out to be dance class after school. He even talked Victoria into joining him.

“I don’t know,” Victoria said. “Ballet looks like a lot of work.”

“Of course it’s a lot of work!” Winston said. “That’s what makes it awesome.”

As time passed and Gamora grew, she seemed more and more like any other toddler.

Except, of course, the fact that she never needed to eat or

Sawyer was perpetually overwhelmed. He came home from work, focused entirely on Gamora until she went to bed, and then crammed in as much preparation as he could for work the next day.

His fatigue left him open to more of the same harassment from his peers that he’d lived with all his life. 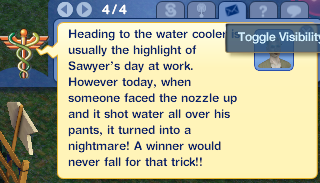 (Sorry for the rollover artifact.)

You would think that a group of medical research specialists would be a bit more mature. You’d be wrong.

Still, Sawyer’s dedication to Gamora never flagged. She was his daughter, and he was determined to raise her to be exceptional in every way.

When he could teach her no more at home, they began to spend their evenings at the library.

They spent an hour before bedtime each night reading Introduction to Calculus for Infants and My First Neuroscience Text.

It wasn’t clear how much Gamora was really picking up, but she devoured each page with her intense eyes. For her, the most important part was her time with Daddy.

Edmund also started spending time at the library, down in the musty basement stacks, seeking answers to questions long unasked.
He spent so much time doing that one night that the police caught him leaving the building long after curfew.

Dylan was livid. Nobody had ever seen him so angry.

“We had no idea where you were!” he shouted. “Do you have any idea how your mother and I worried? We were sure you were dead in a ditch somewhere!”

“You’ll think about how sorry you are while you’re grounded, young man.”

Andria stopped by the farmer’s market to stock them with the best of her autumn harvest.

There she ran into a man she vaguely remembered.

“I couldn’t help but see you there,” he said smoothly. “I’m Thomas Mosely, celebrity reporter.”

“Oh!” Andria said wryly. “I do remember you now. You’re that paparazzi that was always stalking Abby!”

Thomas smiled. “Well, I might have been photographing Abby, but it was hard to keep my eyes off you.”

“Aren’t you the flatterer,” Andria said. “I’m sure that line will get lucky with some other married woman.”

But Andria’s heart fluttered, and she felt her face flushing at Thomas’s attention. She hurried away from him and headed into the woods. She could still feel the heat of the flush on her skin.

Thomas Mosely was a skeez. So why did his amorous gaze make her heart race?

The thought of going home to her husband felt so…. boring.

Unaware that he was the boring husband, Dylan was looking after Connery when Abby found him outside as she was getting ready for yet another Plumbob Studios reception.

“I was hoping for some brotherly advice,” Abby admitted.

“Me?” Dylan said. “That’s a surprise. I don’t think you’ve ever asked my advice for anything.”

“You know more about, well, domestic stuff than I do,” Abby said awkwardly.

Dylan frowned. “I’m not sure if that was a compliment.”

“Relationships, all right?” Abby said. “I know you always wanted to settle down, but how did you know you wanted to do it with Andria? How did you figure out if she was the one?”

Dylan thought. “I wasn’t sure for a while,” he admitted. “But the truth is that no matter how alarming it was to think about living with her, the one thing I couldn’t face was living without her. It turned out that I was capable of accepting a lot of things I never thought I could because she was too important not to.”
“Were you ever afraid?” Abby asked.

Abby smiled back, and the smile broadened to a grin. “Thanks,” she said.

The Plumbob Studios limousine came to pick Abby up for the reception, and she thought hard about Chaim and Dylan and Andria and what made relationships work.

Dylan and Andria looked like the perfect couple to Abby. Their example was an intimidating one to follow. Knowing that her brother could find commitment frightening somehow made everything better.

She picked up her phone and called Chaim. “Hey, it’s me. When do you get off duty? Would you like to meet me after this networking thing?”

Chaim wasn’t terribly comfortable with the celebrity set, so it was convenient that his shift ran late enough that everyone would already be gone.

“Do you want to go get a drink or something?” he asked. “There’s no reason to hang around work now that your thing is over.”

Abby grinned. “I had something in mind,” she admitted. “I hope you don’t mind hanging around for a few more minutes.”

“Sure,” Chaim said. “Whatever makes you happy.”

Abby stepped forward and swept him into her arms. He yelped.

“You make me happy,” she said. “I think I’m finally ready to take the next step with you.”

“You want to move in together?” Chaim asked. “For real?”

“Do you still want to?” Abby asked, suddenly chilled.

“Are you kidding?” Chaim exclaimed. “Pinch me so I know I’m not dreaming! I still can’t believe a woman like you wants to be with a man like me.”

Abby giggled, feeling young and free for the first time she could remember since she began acting. “Then tonight is the start of something new,” she said. “I wanted to do something special to celebrate.”

“I am yours to direct,” Chaim said.

“Come on,” Abby whispered in his ear. “I want to show you something.”

She led him around the back of the studio to where her dressing trailer sat waiting to be towed to its next location. “This is mine,” she said. “We can do whatever we like here. Let’s celebrate.” She led him inside.

“Wow,” was all Chaim could say later.

“Come on,” Abby said. “Let’s start our new life together.”

So we say farewell to Abby, at least as a sim in the active household. She left with 210k happiness points!

That was a nifty thing I discovered. Andria bought an elixir at the elixir store that doubled lifetime happiness points earned for 24 sim-hours. I was curious as to whether it would work for the LTW, and it did! So Abby really raked in the points for this legacy!

OK, maybe I’ve been making these posts too long….  It’s starting to take me a long time to write them. I’m kind of embarrassed that the last two generations took up more than 50 posts each, and I’ve been trying to be sure that there’s some major life change in each post of Gen 6. But there’s so much STUFF.

Oh, and dude, the library for reading toddler books. How did I not know about this until now? The reading bonus from the library makes the books read almost instantaneously.

Unfortunately, I can’t seem to find which bookshelf generates toddler books online, so Sawyer could only read her the books he owned.

Introduction to Calculus for Infants is a real book, and we own it because the title was hilarious. The story of geeky x and his fabulous friend f, who explore the amazing things they can do together. It’s really just a cute kid’s alphabet story with a bunch of advanced math words in it. OTOH, our daughter started recognizing graphs in one of my husband’s books on Bayesian analysis, so I’d say that maybe it does serve a purpose — it helps your kid think of math ideas alongside Mickey Mouse and the Cat in the Hat.