After all that bleakness, we need some Simantics!

Here Andria is sabotaging the massage chair. I play her Technophobe trait as an extension of the old fae being vulnerable by cold iron myth. You’d think that she’d stay away from technology. But no. In reality, when left on autonomy, she goes around breaking things.

What is it about Plum??

At least Leah was happy with her.

Here I discover why you must raise the ceiling for a basketball hoop. This is a bad picture, the ceiling is exactly at the top of the shot.

At least Rosie landed with style.

The other sim playing basketball is Hunter’s daughter Gina.
Here is Abby. Where is Abby? Your guess is as good as mine. After she glitched this way twice, I did Reset Everything, and that stopped it. 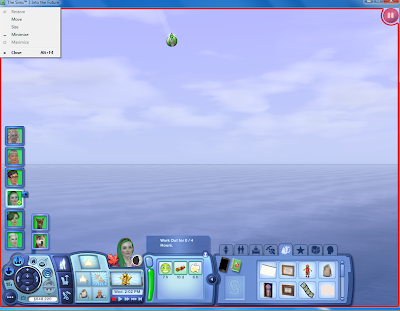 Here the two resident paparazzi have a water balloon fight.

I can’t find this broken object to remove it. It looks like two placemats, one on front and one on back.

I was nearly through the wake before I realized that Abby’s dress was also broken. Transparent formalwear FTW. Ewww. 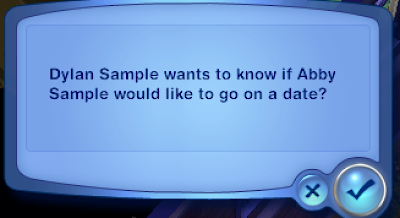 I HAVE NO IDEA. 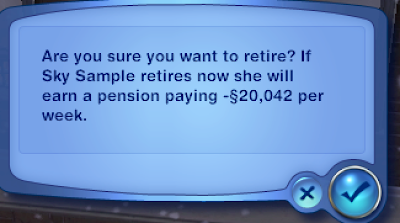 I once used NRaas MasterController to give a sim a job, level her up, and retire her, all while the game was on pause. (I was annoyed because NRaas had her quit her job rather than retiring.) Don’t do this. It resulted in a pension of several million simoleons.
Turns out there’s even a totally logical reason — Pension is calculated by dividing your lifetime earnings by the amount of time you worked. The sim had gotten bonuses from promotions while only having worked a fraction of a second.
But a NEGATIVE pension? I can’t even. I. Can’t. Even.
Sky had a totally normal career as far as I know. I didn’t fiddle anything. She didn’t do a whole lot of Singer work in her final week because I was having so much fun with the Ghostwriter comeback. But still.
I used MC to cancel her pension.

And the Avalon Gossip Column:

Nemo took up inventing in his final weeks in addition to driving around on his monster motorcycle. Then he finally passed on, and he seemed to have an impressive opinion of his next of kin: 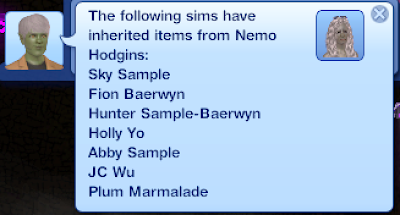 He’s actually related to Andria — she’s Sebastian Hodgins’ daughter and thus Nemo’s niece. You notice she didn’t get anything, but Sky, Hunter, and Abby did.

When Hunter passed on, he and Meteor were regularly winning horse races. His daughter Gina Gina Sample-Baerwyn took up the tradition after him, though she’s not quite first prize material yet.

In the long time tradition of tender young things pairing up with doddering Elders, Gina and Hector Sword (Andria’s uncle) are a serious couple. I doubt he’ll live long enough for them to get married.

I already mentioned that Dragonwife Bard Wu and Tomas Sample-Royale are happily engaged. I’m not sure either of them has enough lifespan left to consider marriage.

Manisha, who I moved into town, cannot manage her money.

Matt and January Callender-Doctor, our resident vampiric lovebirds, are still in love.

Asriel Bookabet, Forest’s apprentice of Evil, excels at being Evil. He was recently promoted to Con Artist.

Just included because I love the game’s book titles. Dragonwife, in addition to being Abby’s boss, is a successful science fiction author. 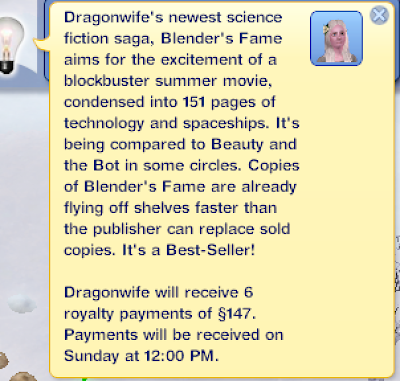