Andria had big news to greet Abby and Sawyer on their return from school. They were soon to be an aunt and uncle.

Dylan only recently learned the big news himself.

He was beside himself with joy.

When he wasn’t on photography shoots, you could find Dylan at the library, reading up on what to expect when your wife is expecting.

He did get to be a pretty good hand at massage.

There were more surprises too. While Sawyer and Abby were at school, Andria oversaw the redecoration of the Sample Estate.

Her requirements were simple: No modern technology in the living areas. Nothing more electronic than a table lamp.

All the electronics had been moved to the den. When she thought no one was listening, she referred to it as the “Devil’s Cave.”

Abby and Sawyer took Dylan aside to ask him what the problem was. He only shrugged and said, “Technology makes her uncomfortable.”

Dylan seemed pretty comfortable with limited access to electronics, but then he had never been one to spend too much time with technology.

Everyone was braced for Sawyer to throw an enormous tantrum, but he merely looked around the new living room and said, “I wanted more privacy anyway.”

He moved out of his bedroom and into the unused barn.

Or, better said, *beneath* the barn.

There he built a new lab.

The next day, he started work as a resident at Ygraine Memorial Hospital. Sawyer wasn’t the type to go into private practice. His goal was to get to place where he could focus on the body and not be bothered by the patients.

He immediately got off on the wrong foot with his coworkers.

Fortunately, it didn’t bother him as much as it did when he was younger. Sawyer already had authorship on major groundbreaking research. They could play pranks on him, then go home and weep at how much smarter he was than they were.

Also, these bullies didn’t use their fists.

Abby prepared for some general auditions and puttered nervously around the house. Rebuilding her acting career would take time. She hoped her fresh skills showed.

This gave allowed her to spend time with her mum, who was also hanging around the house, waiting for the launch date of her next space mission.

Sky wasn’t home much. She was more in demand that ever, and she was making a lot of personal appearances.

She saw Leah and her family a lot these days. Plum was even more eccentric these days, and she liked to send Leah Sing-O-Grams in the strangest places.

Leah and Plum even invited Sky, along with Dylan, to their daughter Devon’s birthday party.

Sky and Leah had built a strange relationship, but it worked.

Ghostwriter had made a comeback. Garry was managing their gigs, and their schedule was filled up far in advance.

They might be old, but they hadn’t faded yet.

Then Sky got an amazing phone call from her agent. She was going to be inducted into the Avalon musical hall of fame! 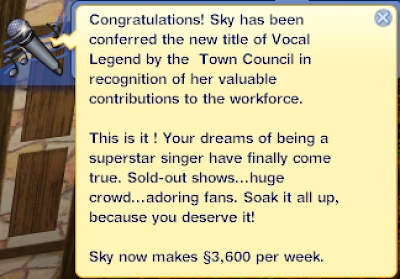 She ran out to the garden, where Xia was playing in the sprinkler.

“I knew you had that kind of talent,” Xia said. “Even when we were kids.”

“But you know this just means more burglars will try to break into our house to get your underwear?”

Meanwhile, Andria and Dylan were having some serious conversations about their child-to-be.

“You know this child will be fae, right?” Andria said.

“I hadn’t thought about it,” Dylan admitted, “but I shouldn’t be surprised. Does that mean he’ll be like you? Able to transform?”

“She might be like me,” Andria said. “Or maybe something else. We have to wait and see. I’m going to use some old tricks my father taught me to ensure this is a good child.”

Dylan gulped. “Old tricks? You mean magic? What do you mean ‘ensure this is a good child’?”

Andria gave him a wry smile. “Trust me. We don’t want a bad fae child.”

She spent a lot of time at the Alchemical Academy after that.

Dylan was in for another surprise.

Finally Gen 7 on its way! Can you believe it? I can because this kid is already a teenager in my game.

These posts aren’t my finest work, but what can you say? We’re moving the story along.

If you notice that Adam isn’t the drummer in that club gig of Ghostwriter, worry not. Adam’s still around. He just didn’t show up, so they invited some other guy to jam with them.