Abby hadn’t realized how much she had missed home until she pulled the truck up in front of the house. Dylan and her mum were waiting for her in the yard.

She came into the house to find that Andria had been cooking all afternoon in anticipation of their arrival.

They spent the evening sharing stories over delicious food. It was good to be home.

Andria had transformed her garden into a small working farm.

Xia had started taking massage classes at the spa.

She practiced on Sky, who wasn’t complaining.

Abby got to be there while Connery grew up!

He was an adorable, fuzzy, huge adult dog.

The most powerful news was that the campaign against Nemo Hodgins that Abby began had been successful.

Aminali had received most of the attention, and it had boosted her career. Abby had wanted it that way. She still did. Abby didn’t want a career boost from Nemo Hodgins, even if it came from bringing him down. That was the mistake she’d made the first time.

Still, she hoped that now that she’d chosen a path that contributed to her self-respect, that path would also produce some acting jobs.

She met with Aminali for coffee, shared stories, and wished her luck.

Then it was time to return to school for the final term.

Everyone Abby and Sawyer knew ditched student orientation for the second term. Rumor was it was poorly attended.

Abby thought there were fewer students in lecture, too, though the student roster was the same. They were all asleep anyway, so it hardly mattered.

She threw herself into her acting classes. If university was going to make her a better actress, this was her last chance.

She met up with some of her friends from last term for some intense study sessions. There were fewer parties this time.

Sawyer’s classes involved a lot more field work this term. He spent a lot of his time collecting specimens and DNA samples.

Between the team research experiment and the specimen collection, Sawyer spent more time outside in his last term of university than he had most of the rest of his life put together.

Girls still followed Sawyer everywhere he went. This seemed to bother him a lot more than it did last term.

You would think his unveiled hostility would make them give up on him, but you’d be wrong.

Then there was the research project.

Manisha was still working on it as intensely as ever.

Sawyer couldn’t consider leaving the project. Social awkwardness was hardly important when compared to a chance to participate in a world-changing discovery.

At first, he tried to ignore her. Politely.

He started spending a lot of time with his science professor.

Partly, he wanted something to distract him from Manisha while he worked on the project. Partly, she was just a fascinating person with a lot to teach him.

They got to be friends, or at least the closest Sawyer had to a friend.

She taught him to mind meld. He wasn’t sure the point, but it was fun.

One evening, he was finishing up after working until nearly midnight.

He turned around to see Manisha watching him. “I didn’t think anyone else was here,” he said.

“I waited for you to finish,” she said.
“What do you want?” he asked curtly.
“I want us to talk again,” she said.
“I want to talk to you,” Sawyer said. “I didn’t think you wanted to talk to me anymore. I’m trying to be polite.”
Manisha smiled. “Thanks, but it’s OK. Let’s just forget that thing at the end of term ever happened.”
Sawyer was terribly confused, but if she wanted him to forget about it, he was only too happy to try.
They became friends again. Manisha loaned him some of her comic books, and they talked about them when they were finished working on the project together.

Midterm presentations approached. Sawyer rehearsed his every place he could find.

Public speaking wasn’t his strength, but he managed all right.

Afterward, with stress level reduced, Sawyer worked up his nerve to call Manisha and ask her out to a movie. That’s what normal people did on dates, right?

Manish was delighted at the invitation. They met at the university cinema that evening.

They saw a science fiction movie. Sawyer covered the movie and bought them popcorn.

Manisha leaned her head on his shoulder during the obligatory love scene. Sawyer froze. Hadn’t she rejected him? What was he supposed to do now?

“I had a great time,” Manisha said. “It’s been so good to spend time together outside of research.”

She looked into his eyes and smiled. Sawyer just couldn’t help himself. He had to try again.

With the same kind of result.

“I don’t understand,” Sawyer said. “I think this is what you call ‘mixed signals.'”

Sawyer had had it with women, and he didn’t care who knew it. He complained to Abby out loud in the middle of the dining room.

“What do I nee do to do get this woman to woohoo with me? These social rules are total nonsense!”

“Is this seat taken?” his dormmate asked as he finished his rant?

Abby hid her laughter behind a cough. No matter how awful Sawyer behaved, he seemed to get no less attractive — to all the women except the one he wanted.

Even the craziest parts of university life began to seem routine.

One evening, Abby got a text from Harold Assange at the Fraternity, inviting her to a kegger. There was a party almost every night there.

She’d been politely turning Harold down, but classes were going really smoothly. Why not?

The first think that she discovered as she walked into the fraternity was some poor chick being harassed by a guy who wouldn’t leave her a lone.

“Hey, I need your advice!” Abby called out from the other room. “I need your honest opinion. Does this dress make me look fat?”
The girl turned out to be Tammy Parker, and she was very grateful. They hit it off well and had a great time talking at the party.

By the end of the night, Tammy confessed that her real crush was on none other than party master Harold Assange himself.

“I think I might able to help you out,” Abby said. “Harold and I go way back. Ok, way back to last term. I know he’s not seeing anyone right now. Maybe I can hook you up.”

So she went to find Harold, who was really partying hearty. “What do you think of Tammy?” she asked.

Then it happened. The research device was complete a second time. Sawyer had the honor of pulling the lever as his professor looked on.

Success at what? We’ll have to read the journal article to know for sure. But trust us it shaped the scientific future of the Simworld for decades to come.
The research team didn’t come to consciousness until after nightfall. Sawyer and Manisha leaned on each other groggily as they stood up.

“Did you see that?” Manisha exclaimed. “That was amazing!”

“Oh,” Manisha breathed as they separated. “That was really good.”

After that, Sawyer had a girlfriend after all.

At last there were finals. And freaked out pre-finals antics.

“We did it!” Abby squealed to Sawyer. “Thank you so much for convincing me to come with you to school!”

The entire family came to see Sawyer and Abby graduate. They were the first Samples in the long history of their family ever to graduate from University.

After the ceremony, Manisha waited for Sawyer outside the dormitory.

Was that Sawyer, Abby wondered as she celebrated with her dorm mates, with Manisha? Headed to the room on the top floor with the big bed?

Could that really be happening?

When Sky and Xia came looking for them, Abby told them he was indisposed.

Abby took them out to the Sim U hangout just for fun.

“I am so proud of you,” Sky said. “Whatever happens, I know you can handle it.”
Abby blushed. “Thanks, Mama. You’ve been so supportive through, well, everything. I didn’t expect that.”
“You can’t possibly make a bigger fool of yourself than I have, daughter mine,” Sky said wryly. “It runs in our blood.”

Back in the dorm, Sawyer and Manisha didn’t do a lot of talking.

“I’ll call you when I get settled,” Sawyer promised. “We’ll make this work.”

Abby and Sawyer packed up their dorm room for the last time.

They said goodbye to their dorm mates in their own peculiar ways.

Sawyer was, at last, relaxed around the women.

As they were pulling the rental truck out of the dorm, Abby stopped for java and doughnuts at the local cafe.
She was struck by a sudden, embarrassing impulse.
All right then. She would never see these people again. It was time to give it a try.

Woo! These university posts were long! Apparently when I try to consolidate into fewer posts, I just write longer ones.

University was fun, though, and it played through quickly.

Sawyer could NOT make any progress with Manisha using normal romantic socials. “Heat of the Moment Kiss” finally did it! Apparently, Sawyer only makes a romantic connection if he completely shuts his brain off.

Just to prove that I was following his wishes all the way: 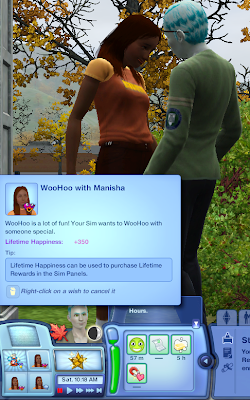 That’s not one, but two wishes to woohoo with Manisha. And a wish to talk to her. He was completely head-over-heels.

I have a bunch of outtakes of me trying to get him to hit it off with other girls — since they were all attracted to him — but Manisha was the one and only.