Enigma was most restless in the evening, and Hunter often found himself taking long walks with her starting at dusk. Now that he was in business for himself, he could set his own schedule as long as the work got done.

Avalon was a beautiful place at night. It seemed to have its own peculiar magic that never came out during the day.

Sometimes Enigma would smell something that would revert her to her wild nature, and in the blink of an eye, she’d disappear after some prey or another. She was always home by morning. Hunter hoped none of the neighbors had any missing pets.

This turned out to be one of those nights. He heard Enigma whuff, and when he turned to look at her, she was already gone. Hunter sighed quietly and started to turn home, but he heard an odd muffled clattering noise and turned toward the ocean instead.

A herd of wild horses had made its way onto the deserted beach behind old Tintagel Fortress. Hunter stepped out of the trees to the edge of the sand and stood watching them silently. They were beautiful.

Then amidst the horses, something glittering caught his eye.

Hunter gasped. Could that possibly be a horse?

It tossed his head as if to laugh at him. No, it couldn’t possibly be anything mortal.

Hunter just stood there, breathless and mesmerized, barely able to think. The creature watched him too, unafraid but keeping its distance.

The wild horses finished frolicking in the sand and moved on to better grazing land. The beach was now empty except for the two of them.

Hunter moved closer. The creature took a couple of hesitant steps in kind. And after a long moment, they were staring eye-to-eye.

It snorted. Hunter could feel its breath on his hand.

Then, without warning, it leaned down to nuzzle his outstretched hand.

“Hello, Your Majesty,” Hunter said, keeping his voice soft and even. “It’s so nice to meet you.” He reached out a trembling hand and buried his fingers in the creature’s mane.

First, it let him stroke its neck. Then, suddenly, it threw its head in the air and let out a whinny like bells ringing.

Then it was gone.

Not like it ran away into the woods. Not like it disappeared in a poof of fairy dust. It was just gone, as if it had never existed. Even the footprints it had left in the sand were gone.

Hunter was left wondering what the heck had just happened.

After he remembered how to walk, he headed home and arrived long after midnight. Enigma was waiting for him with a quizzical look in her honey eyes. Hunter gave her a tired smile. “Sometimes I find something to chase too, you know?” he said. Then they settled down to sleep… or try. Every time Hunter closed his eyes, he saw the supernatural sparkle of that fairy tale beast.

Certainly Avalon had its own kind of magic, but this?

The next morning, he made his way to one of Forest’s old haunts, the Arcane Institute for Lore Preservation. It was a strange and kind of creepy place, but it wasn’t like you could go to the municipal library to check out books on local fantasy sightings. 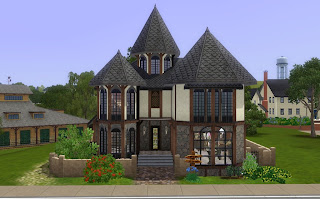 He sifted through the old tomes, looking for sketches or keywords. And it actually didn’t take time to find it.

Unicorn: Old French, ‘unicorne’. Latin, ‘unicornis’. Literally, one horned: ‘unus’, one, and ‘cornu’, a horn. A fabulous animal resembling a horse with one horn. Visible only to those who search and trust, and generally mistaken for a white mare. Unicorn.

Could he really have seen a unicorn? Touched a unicorn?

He knew he had to find it again and be sure.

Then he glanced down the page and saw something else.

“Hey,” he mused to himself. “Isn’t that the creepy doll that Forest has been carrying around?”

Hey all. I’m REALLY trying to get back into the rhythm of posting.

You’ll notice that I fixed my exterior shot problem by pulling one of the promo pictures for the lot I’m using off of ModtheSims. That’s the Arcane Institute by Ye Merrye Makers, and it’s a really spiffy supernatural consignment store.

There’s been a lot going on, but there’s always a lot going on it seems. I’ve been playing like crazy, but it’s been hard to pick the story back up even though I have all sorts of things I’m eager to tell.

Of course, I also have this NIF challenge that’s poking around in my head, waiting for Island Paradise to be released. I am a sad, sad person.