The next few days were a blur of out-of-sync feeding schedules and catnaps in between. Everyone pitched in to help, but three infants was still a staggering amount of work.

Finally, a bit of a rhythm began to develop to life, and there were small segments of time to do something other than feed babies, cuddle babies, change babies, and sleep.

At which point, Veronica looked out the window to watch her parents-in-law and saw red.

She ran out of the house shrieking. “You crazy trespassing bastard! Get out of my house! Get off my lawn!”

The paparazzi was so taken by surprise that he dropped his camera and ran. Veronica ground the expensive equipment under her heel and glared at Fabian, Zahra, and a shocked Charles standing in the doorway.

Nobody saw fit to protest. “It’s nice to be on the beach,” Charles said haltingly, “but this place is awfully close to downtown. It would be nice to live a bit closer to nature.”

While Veronica and Charles looked for a new place to live, Fabian and Zahra picked up the slack. They scheduled movers and packed up the car in between baby feedings.

They really outdid themselves. 57 Waterfall Way was an old park that had been converted into private property. It was private, secluded, and breathtakingly beautiful while still within an acceptable drive of town.

The house itself was rustic and cozy. 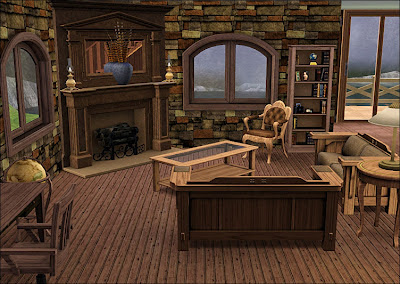 With a few incredibly luxurious features.

And best of all, it was on the shores of a private lake stocked with fish. 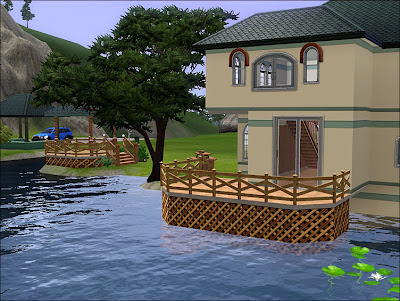 With some of the most beautiful fishing views to be found anywhere.

There was a perfect nursery with space for three cribs.

A downstairs bedroom that would be perfect for Fabian and Zahra just as soon as Fabian took down all the decorations and replaced them with Ada’s paintings.

There was a cozy little bedroom with just enough space for Ada’s bed and writing desk.

And an upstairs master bedroom right next to the nursery with a back deck just the right size for Veronica’s chemistry gear.

“Thank you for rolling with me on this, Veronica told Charles as they retired, exhausted from the move.

“I think you could make it up to me,” Charles suggested with a raised eyebrow.

“It’s time,” she confided in his headstone. “You’ve been sitting beside my bed for most of my adult life. I miss you. I hope there’s something for us to find in the Netherworld. But I’m ready for just the living to sleep inside my house.”

Veronica took breakfast at the new breakfast bar, gazing out over the beautiful scenery that was now theirs.”

“All right, you bastards,” she said under her breath. “This place is my castle. If you cross me here, you’ll regret it.”

The story timing was good, but the truth is that I got completely fed up with the English Country Estate. It was a lovely home, but it was clearly not well playtested and was filled with things that looked pretty but didn’t work. There were navigation issues in the house. Something was rotting in the kitchen/dining area that the maid never cleaned up and I couldn’t find, so whenever anyone walked into that area, they took something like a -40 hit for being in a disgusting environment. The stairs in the landscaped yard never worked — the sims would take forever to walk way around them on the grass.

And then the final blow was that I added the garden improperly to the concrete patio. The sprinklers dumped huge amounts of water onto the patio, and the water couldn’t be cleaned up due to routing issues. I wanted to add a fence around the garden to keep the water in, but you can’t put fencing on top of water puddles, and the water puddles couldn’t be cleaned up because of routing problems ARGH!

On the contrary, THIS house is the best house I have EVER played in the game, hands down.

It had a couple of weird minor issues, like the bathroom had no wall covering and gave an “unfinished” moodlet. That was easy to fix. And it had almost no lighting. But it’s very attractively decorated and has perfect routing. And it’s just a friggin gorgeous lot. It’s such a delight to play in that it is affecting my decision to move to Elfland soon. I think I may have to try to move the lot too, even though it doesn’t fit the style of the Harry Potter world very well. And I’ll lose the water fall because that is part of the worldscape. Ah, well.

In best news of all, I have gotten to play!