The Anton Pierce film Free World Dream, was released mid-summer. It was a heartrending story of a girl’s rise from humble beginnings to become the Leader of the Free World, starring up-and-coming actress Abby Sample in her first headlining role.

The critics loved it. The masses didn’t like it quite as much as the critics, but well enough to go see it and talk about it a lot. Suddenly, Abby became a household name.

She was in demand as a speaker, as a mentor, and even as decoration at local nightclubs — word-of-mouth marketing that she might stop in for a drink brought customers in droves.

It was exactly what she’d always dreamed of, but it was also very intimidating. She spent a lot of time rehearsing in front of the mirror just for casual social appearances.

Then the biggest news came down. Free World Dreams had been nominated for a Simmy Award in ten categories… including Best Actress.

Abby was in shock.

Sawyer’s life, on the other hand, had narrowed down in scope. When he was not at the hospital, he was with Gamora.

Fatherhood involved all sorts of things that made he short of temper. Gamora was so helpless. He had to work hard to understand her and be understood. It was so social and so outside his comfort zone. When Gamora was in bed, Sawyer would disappear down to his basement lab and refuse to talk to anyone.

Still, the progress was more exhilarating than anything he’d ever experienced. Gamora surprised him with something new almost every day.

When she spoke her first word, “color,” he talked about it nonstop to everyone in the family for a week.

Still, Sawyer worked long hours at the hospital, and he assumed that Dylan and Andria would look after her while he was gone. This didn’t turn out to be terribly difficult. She was the most self-entertaining child either of them had ever seen. She almost never cried. She spent hours singing to her dolls and speaking to them in her own special babble.

And she literally never needed a bottle or a diaper change, a fact that made both Dylan and Andria nervous. Sawyer said she photosynthesized, but to both of them she just seemed to live on air.

That was a good thing, since Winston was by far the pickiest eater of the four children of the Sample Estate. It took more effort to feed him than it took to feed two children.

And wage his war of interior decor with his sister.

Andria was on her eternal quest for elixir ingredients.

She caught Abby the day of the Simmy Awards. “Stand still!” she announced. “This will help!”

“Trust me,” Andria said. “It’s an elixir of Asian day spa. It should help you stay calm and collected at the awards.”

“You really need to learn to give me warning before you throw one of those things,” Abby said.

At first, it didn’t work.

Abby was so overcome with anxiety that she threw up on the pavement outside the Magical Moving Pictures Theater before she’d even set foot on the red carpet.

All she could think was that every gossip magazine in Avalon would have an article about her losing her lunch.

Whether it was Andria’s elixir or not, she finally felt ready to take on the world.

And take it on she did. She even got a chance to give the acceptance speech she had been rehearsing for days, just in case.

Abby Sample was the proud recipient of a Simmy Award for Best Actress.

She slipped away early from the awards reception to returned home to a cheering family.

“What have I always told you?” Sawyer crowed. “You now have the Nobel Prize for acting. You’re a genius in your field.”

Abby laughed. She was already high as a kite. “I never thought about it that way. ‘Abby Sample: Acting Genius.’ I like the sound of that.”

“I always said you were smart. You could have picked something more useful than acting for all of your intelligence, like I am with neuroscience, but at this point you might as well keep going with this. There’s nothing you can’t do in acting.”

Abby couldn’t help but smile. Sawyer was trying. He really was.

While her brothers were congratulating Abby and patting her on the back, Andria was pulling her latest creation out of the oven.

“Don’t forget!” she exclaimed. “We have a lot more to celebrate tonight!”

“Oh, Mom!” Edmund whined. “I told you I didn’t want you to do anything for my birthday!”

“You told me you didn’t want a cake,” Andria corrected him, “so I didn’t bake you one. I baked you a pie.”

It was Winston’s day too.

Andria set the table and called everyone in. “It’s time to celebrate with sugar!”

And it was good. 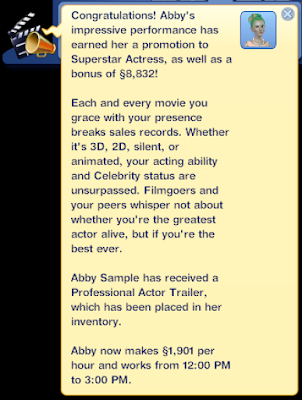 Abby reached her LTW! It wasn’t the award ceremony, but that was very close. The real reason Abby threw up was because she arrived by LLAMA transporter, and it made her nauseated. Andria’s elixir was one that doubled happiness points for wishes for 24 sim-hours. She found it at the elixir consignment shop when Abby was just about to get her LTW. I wondered if it would double her LTW points, and it DID! So I get another point for Abby reaching 200K happiness points before leaving the household. Haha!

Abby did actually get the Simmy for Best Actress. I ended up playing the award ceremony twice due to a game crash. The first time she got a third-place award of some kind. The second time she got the Simmy. So, it was just random, but still nice.

This is the FINAL post from all the playing I did in October. I stopped playing the night of Edmund and Winston’s birthdays and didn’t play again until March. Wow. I can’t believe how long it took me to get through all that.

The next post will be from gameplay that’s a month old or less. Dang. You’ll be able to tell because both Victoria and Winston got makeovers.