Dylan continued to work on making nectar. It had become a passionate hobby.

Fortunately, it was just a hobby. His career was much more successful. 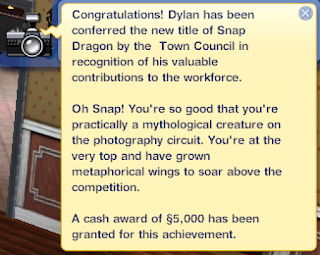 Victoria continued to grow. When she entered into her picky eater stage, even Dylan was ready for her to be old enough to feed herself.

Fortunately, Winston and Victoria’s shared a birthday, and it was right around the corner.

Abby was almost bouncing through the room. “The reviews of my movie are in!” she told everyone excitedly. “The critics love it! The box office returns are better than expected. Everyone loves my performance.”

“See,” Sawyer said. “It was obvious you would be successful. You’re not stupid. I told you so.”

Later in the evening, Andria helped Edmund with his homework.

Sawyer made sure she was too busy to bother him and went out into the garden.

There, he planted his precious experimental seed.

When Edmund was ready to leave the nursery, he took over Sky and Xia’s old room and decorated it to suit his tastes.

Now he had to share it with his sister, whose tastes didn’t match at all.

Edmund spent a lot of time studying on the Internet. He signed himself up for an after school art class.

She also managed to charm everyone. She was able to persuade Edmund to play outside with her.

She could even make Sawyer laugh.

One evening, during one of Sawyer’s in-house dates, Manisha heard something.

“I do hear something,” Sawyer admitted, looking disgusted. “I think I know what it is.”

Indeed, someone was attempting to break into the house. “What an idiot,” Sawyer said as he grabbed his phone to call the police. “I’ve seen a lot of burglars in this house, and this one has to be the stupidest.”

“Wait,” Manisha said. “How many burglars have you seen?”
The burglar really wasn’t very bright. She was still there when the police arrived to apprehend her.
Abby returned home just as the cops finished their routine inspection of the house. As he was leaving, one of them tipped his hat to her. “Hope you have a better week, ma’am!”

“Thanks?” Abby said, raising her hand to wave. Wow, was he attractive.
Andria was working on some sort of alchemical project that had her out all over town gathering ingredients.

She smiled triumphantly as she filled up the bottle with her new potion. “This will surprise the heck out of Dylan,” she said to herself.

Abby’s phone rang. It was her agent. “Anton Pierce is directing a new movie, and you’re on his short list for the lead,” her agent told her. “He wants to meet you in person. There’s an exclusive pre-casting party at the Serenity club, and you’re invited.”

Abby couldn’t believe her ears. “Anton Pierce? Really? Of course I’ll be there!”

Anton Pierce had won four Simmy Awards. He wasn’t the sort of direct you turned down. Not that Abby would ever have considered it.
The Serenity Club was an incredibly expensive place designed for Avalon’s upper crust. Sky had performed there a few times, but Abby had never been there.

Anton Pierce met her at the door.

He was eager to tell her all about the new movie.

He was an incredibly charismatic man, and very persuasive.

The downstairs of the club was devoted to performance space. The really exclusive party area was upstairs.

“Relax! This isn’t work,” Anton told her. “Have a good time. Would you like a shrimp?”

Abby settled for a drink.

And tried her hand at Blackjack. She didn’t even have to use her own money.

A new intern, Ms. Flynn, made a scene over a broken nail.

Abby couldn’t tell if she was really that fragile, if she was a natural drama queen, or if this was clever acting.

Whatever the case, she attracted everyone’s attention, and in this line of work, that was usually a good thing.

Justin was at the party when Abby arrived, but by the time she went to talk to him, he’d left. What was it with Justin and parties?

As she was looking around for Justin, she ran into someone completely unexpected — Dion Callender-Doctor, her ex-boyfriend.

They stood there, staring at each other for a moment. It was an out-of-context moment.

“Hey,” Abby said. “I didn’t expect to see you here, but I’m grateful. I want to apologize for the way I treated you. You were absolutely right, and I was wrong. I’m trying to be a better person.”

Dion surprised her again by giving her a completely sincere smile. “We were young,” he said. “I think we both made some bad decisions. I hope you put our breakup behind you a long time ago. I did. I saw your latest movie, and I wanted to congratulate you on an amazing performance. I get to say I knew you when!”

Abby beamed. He didn’t need to know how long she’d tortured herself over Nemo Hodgins and her breakup with Dion. He didn’t seem to know all the awful things that had been written about her in the gossip rags, which was comforting in itself.

They talked for a bit about movies and his current career as a sports coach. Their lives had moved in completely different directions, and that was fine.

“So, now I’m curious,” Abby admitted. “Why are you here? You don’t seem like a film type.”

Dion grimaced. “I’m not, but my boyfriend is. I showed up here to pick him up, but I can’t find him.”

“Really?” Abby said. “I know most of the people here. Maybe I can help you.”

“Sure,” Dion said. “I know you know my boyfriend because he was in your last movie too. His name is Justin Mai.”

So, yeah. All the time Justin flirting with Abby, he was having three kids with Abby’s ex-boyfriend. Weird vibes indeed.

I have no idea what Dion’s actual job was, but he had a whistle on his formalwear. Sounds like a coach or a lifeguard who really loves his job :).

When I gave Victoria her makeover, I really wanted to try a hairstyle I hadn’t used before. But I really think she looks better in the one she aged up in. I think when I open my game again, I’ll change her back to that.

I was pretty disappointed to see a fourth generation of Veronica’s hair in Winston. I believe his eyes color comes from Andria’s father Sebastian Hodgins, though. That’s pretty cool. All three kids have squared-off cheekbones. Winston has a different nose from his siblings. I think Victoria has Andria’s eye shape. Beyond that, I think I’ll have to wait until they become teens to see what they look like.

Winston has some interesting traits, though. One of his baby traits is Natural Cook. I’ve been kind of hoping someone would pop up with Natural Cook. I’d like to play with opening a restaurant.

BTW: There’s no plot point in Anton Pierce working his vampire wiles on Abby. I’d just never seen a vampire do that, and I thought it was funny that he did it autonomously. I think that’s the “Think of Me” interaction or somesuch. I’m not sure what it does; I assume it raises their relationship.