Been a while since we had one of these, eh? I lost track of my funny stuff in the move to Avalon 2.0. But these are too good not to share. The full moon is just golden.

First of all, Zombie Dragonwife decided to come in to Vetinari’s to taste the wine.

Zombie attack on Clifton Hodgins, who was fishing in our pond for some reason.

The zombie didn’t expect that reaction.

Random shot of Abby using the Routine Machine toilet. The animations for that thing are hilarious.

Now, THIS alien has his punk on.

Oh so much to say. Where were we anyway?

Asriel Weaver-Bookabet and Anita Bookabet have declared themselves enemies. Asriel took his son Timothy, who he had with his dear departed wife Zuzu Weaver, and moved into Chateau Crumplebottom with his sister Arya.

February Callendar passed on, leaving the sum of her estate to her daughter with Spock, Sharon Leonard. This means she disinherited her daughter Rosie Winter. We can only guess what’s up with that.

Maybe February was doing Rosie a favor, since it turned out her household was deeply in debt. Maybe she didn’t like Sharon.

Jian and Dragonwife Wu had a late-in-life son named Bryant.

Sean Flynn was promoted to Con Artist. Huh? Apparently he really was kicked out of the criminal biz altogether and has started working his way up the ranks from the bottom.

Clifton Hodgins and Arma Mentary-Hodgins had a falling out. Clifton moved in Ali Bookabet-Mentary. That left Andria Sword alone in the household with Arma, as mentioned in the previous post. The chain of half-siblinghoods makes my head hurt, but Arma and Andria are not related by blood. They probably ARE legally related, though, since Arma’s mother was married to Andria’s father.

When Echo finally died, I went to check on vampire manor. Sean and Lionel had managed to have FOUR CHILDREN while I wasn’t looking. I finally turned off fertility for Sean and Forest, changed Forest’s name back to Sample, changed Rosalie’s name to Weaver, and moved her in with her adult cousins. She’ll be safer there. Forest took the whole thing in stride and just refuses to pay his child support payments. I’m not sure what I’m going to do with the Flynn family. Sean and Lionel’s little girl looks like she might make a good vampire heiress.

I close with Sky sharing some hot gossip with her fan Sam Pistachio: 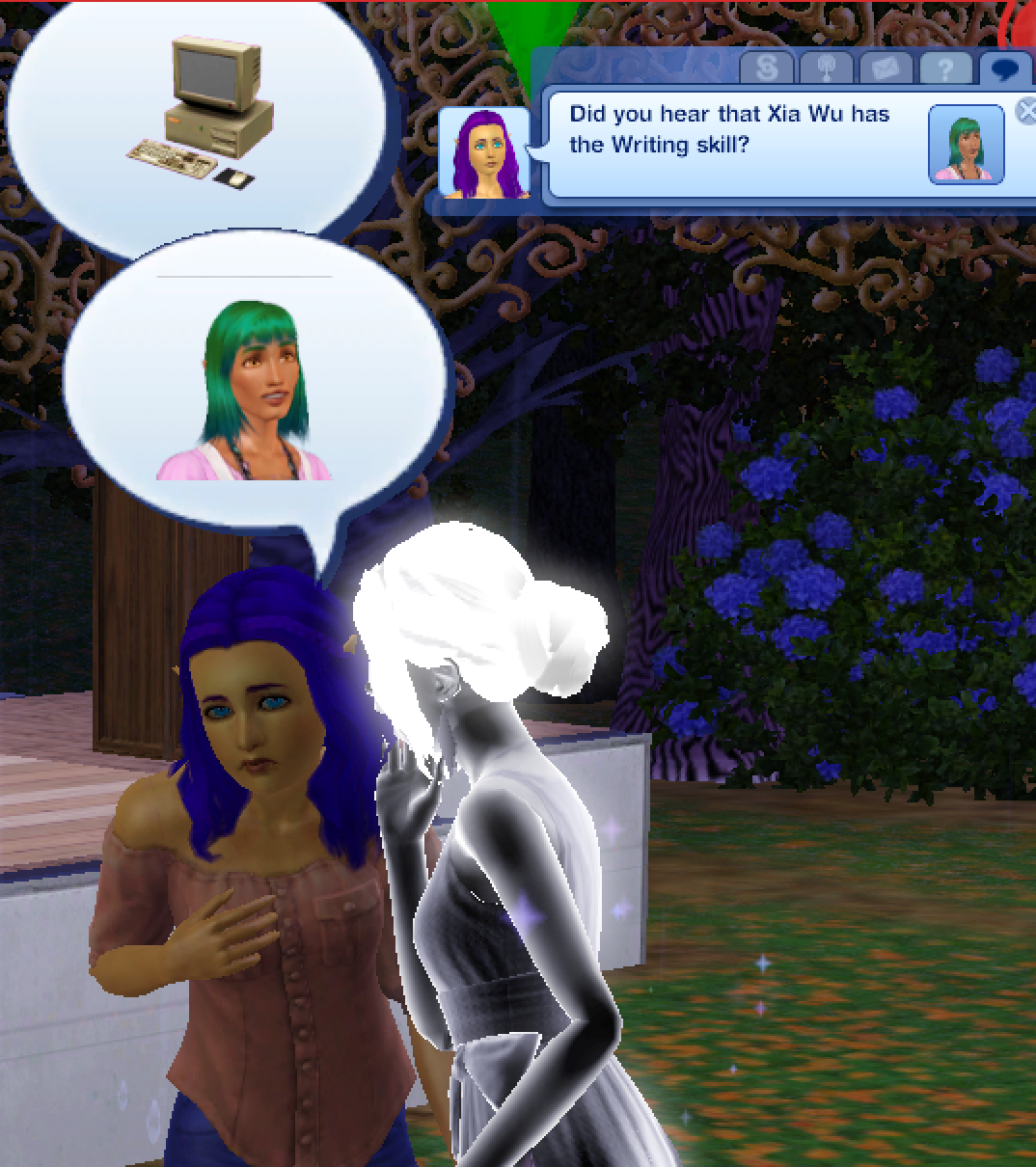 0 thoughts on “Simantics: Zombie vs Aliens”