Ada and Alberto Sample-Royale welcomed their son Tomas into the world with an after-the-fact baby shower.

“Don’t bring gifts, but wear your swimsuits!” Ada exclaimed on the phone. “It will be fun!”

“I didn’t think you had a pool,” Charles said.

“We don’t have a pool. Why would you think we had a pool?”

The party was in the evening, which seemed like an odd schedule for a baby.

“Isn’t it past Tomas’s bedtime?” Veronica asked in passing.

“Oh, he sleeps all day and is awake during the night.”

“Oh, I’m sorry,” Veronica said, remembering the difficult days when the triplets had been babies.

Ada looked puzzled. “Why are you sorry? Do you need to sleep too?”

Veronica smiled. Insanity aside, Ada and Alberto were both self-employed, so maybe the kid’s sleep schedule really didn’t bother them.

Tomas wiggled and gurgled and did adorable baby things on his play mat while everyone cooed at him.

The only one who wasn’t cooing was Jeremiah, who wasn’t pleased about loosing his place as Ada and Alberto’s baby.

It had been such a long time since Charles had held a baby. He dandled his nephew and reminisced about how delightful little ones were without a shred of irony. Parents are so forgetful about the baby stage.

Maybe all the sleep deprivation helps keep the long-term memories from forming. Probably better for everyone.

Once Tomas had gone to bed, Charles and Veronica found a good use for their swimwear.

Prom had rolled around, and Hunter still wasn’t sure what he was going to do. He had no date and no prospects of one, and the idea of standing around feeling self-conscious in a loud, dark room filled with other teenagers gave him shivers. But everyone talked about prom. Perhaps it would be better to go, even if he had a bad time, just so he wouldn’t regret it later.

But wow, it was a lot of people all in one place.

Then, while visiting the dog park with Enigma the morning before the dance, he found an unexpected answer.

Eliana Baerwyn, who was the class a year behind Hunter in school. She met his eyes from across the park, then dropped her gaze with a flush. It was like an electric shock ran through Hunter. He stumbled over a rock, a clump of grass, and a dog bowl trying to get closer to her.

“I had to bring PJ back in time for me to get ready for prom.”

Hunter cringed inside. “So you’re going too?”

She nodded. “Weston Mentary asked me.” She sighed. Then she perked up. “Are you going? Maybe I’ll see you there!”

Hunter gulped. “Sure I’m going! I don’t have a date, but all kinds of people go stag.”

An hour passed while they talked about their dogs. Eliana glanced at her watch and gasped. “I have to go get ready!”

“I’ll see you in a few hours!” Eliana cried as she dashed away.

Well that settled that. Now he had to come up with something to wear.

When he returned to the house, Sky and Forest’s dates were already there. Apparently everyone was going to change in the basement.

Leah was gushing with anticipation, but Ali was mostly quiet and distant. There was some kind of tension between her and Sky that he didn’t understand.

Then everyone scurried away to do their hair and makeup.

Veronica and Charles were thrilled to help Hunter dig up something that wouldn’t embarrass him at prom. It turned out that an old coat of Charles’s worked pretty well, and though Hunter carried more weigh than his father, you wouldn’t notice if he left it unfastened.

“You look dashing,” Veronica said. “My baby is growing up to be such a ladykiller!”

Charles gave his son an elbow nudge. “She’s just teasing you. Have a good time.”

All right then. Showtime. 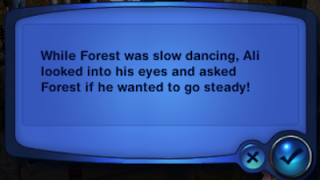 Well, Forest and Sky had a perfect evening.

For Hunter, it was pretty much the way he expected. It was dark, the music was loud, and he couldn’t work up the nerve to ask anyone to dance. Lots of them were there stag, but they weren’t the kind of people who usually talked to him.

Well, at least he’d never wonder if he’d missed the pinnacle of teenagerhood because he didn’t go.

As the dance let out, he was the first one out the door, and he hung around the schoolyard waiting for his lovestruck brother and sister to finish lingering over the last dance.

“Eliana! I thought you’d be in there dancing with Weston.”

Eliana blushed. “Well, you know, it’s really loud in there. It really wasn’t my thing.”

Hunter was so wrapped up in talking to Eliana that he didn’t even notice when Forest and Sky emerged with their dates, waved to him, gave up, and headed home without him.

In fact, he didn’t notice till the curfew police showed up to round up the stragglers and drag them home.

Veronica was a tornado. “We helped you go to prom, and you get dropped off by the cops! This is the kind of thanks we get!”

“I’m so sorry,” Hunter begged. “I just got to talking to this girl, and I lost track of time…”

Veronica’s face lit up. “You were talking to a girl? Well, that’s different!”

Forest, Hunter, and Sky all dragged themselves to bed at dawn, then slept late the next morning with excited romantic dreams dancing through their heads.

And this, believe it or not, is the LAST POST for Generation 4.

I was starting to wonder if I was going to get to play prom. It ran on the last day before the triplets aged up, and some glitch canceled it, so I had to restore from a previous save and do a Reset Homeworld. Turns out that’s a very useful option buried in the NRaas menus on City Hall. I think it was under MasterController.

As it was, the crowd in front of the school was such that I could barely get all three through the door before prom was over. Speaking of the bad routing behavior in this game. I really hope they work on that in Sims 4. I pretty much had to choose who would get actual time at the dance, and Hunter lost out. He was only there for about 10 sim-minutes, but he got his picture.

I’d kind of hoped that the prom would pair Hunter up with someone, but as it turned out he had this lightning flash from the attraction system on the day of the dance anyway. Eliana is a 10 out of 10, and he finds her “Devastatingly attractive.”