We’ll begin with a bit of an introduction to cross pollinated sims around town.

Here’s Lynn Sword and Hector. Lynn has had a long day.

Arma Mentary being trained in Sim Fu by our Slayer, Beatrice Saunders.

Doc U. Mentary, who got old. Considering how things turned out for him in his own story, this is news.

Lara and Alan Berg are a very happy family in this game with two children. The eldest is Alexandra, and I don’t remember who the baby boy is.

February Callender out to dinner with her vampiric mother January.

And sims being sims —

During Avalon’s first full moon, only one zombie appeared. Guess who? And what plans does she have for poor Charles? 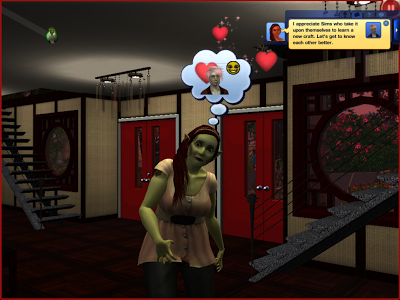 She shambled toward Charles but got distracted by the Sim Fu dummy. Charles shrugged and gave her a private training session.

Emma got pantsed at the assembly.

Echo Weaver proposed to boyfriend Ace Wilde. He accepted, then apparently found out that she was still stalking her ex-boyfriend Zhan Wu and dumped her.

Wu, otoh, while complaining constantly of Echo stalking him, has finally moved on and is going steady with Lynn Sword.

Doc U. Mentary had a few dates with Valerie Ursine and then set his sights on her much more mature, widowed half-sister Toya Ursine-Sample.

Maya and Charmaine Ursine-Langerak had a boy named Lionel. Their relationship is still rocky, but they’re still together.

Alan and Lara Berg gave birth to their second child, a boy named Eloy. Lara immediately got knocked up again.

Nemo Hodgins grew up to YA and almost immediately started going steady with Gala Kandy Marmalade. After a short, intense courtship, they were married.

Zuzu and David Weaver-Doctor are in a close match with Ada and Alberto Sample-Royale and Franco and Ceridwen Bookabet for the most sickeningly cute couple in Avalon. At least one of my simselves is happy.

Joanne Bookabet (I decided to make her Ceridwen’s sister because a lot of unrelated simselves running around with the last name Simself is terribly confusing) is going steady with Spock Leonard. Three guesses who that is, and the first two don’t count.

February Callender has taken up with Anton Pierce (Angel from Buffy). Considering that her mother January and new stepdad Matt Doctor are both newly-minted vampires and she spent about two hours as a vampire one night herself, her interest in a hot vampire lover is pretty understandable.

Did I mention that Anton is a Private Investigator? And Beatrice (Buffy) is the Slayer? Talk about fiction resembling… um, fiction.

Plum Marmalade bats for the girl’s team in this game, and is going with Wu’s teenage granddaughter Xia.