Charles was up at dawn to catch the plumpest fish.

When he made it home with his catch, Veronica was waiting for him. “We are going to thumb our noses at old age,” she said.

“What do you have in mind?” Charles asked warily. Veronica was the one prone to midlife crisis.

She laughed. “Something wild and crazy, but you’ll like it,” she said. She loaded him up into the Vaguester, and off they zoomed.

“This is Tinkerbell’s Beautique,” Charles said.

“I knew you were a smart boy,” Veronica agreed.

The plan was to be inked together as a sort of romantic tribute to each other. Charles hadn’t gotten a tattoo in a long time, and Veronica was right — he liked the idea.

But a little help to dull the pain wouldn’t hurt.

It turned out that he and one of the tattoo artists had a lot in common.

Veronica had to haul him away to actually choose a design.

They settled on an Avalonian flying mouse. Veronica loved the imagery of a creature flying free.

Charles appreciated the fact that it was an endangered species. 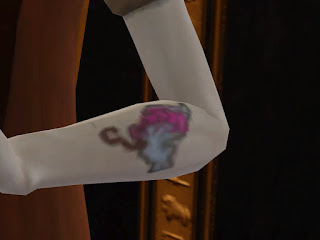 When they were done, someone recognized Veronica from her lecture series on the spirit world.

It was nice to have a name for yourself.

Forest, Hunter, and Sky hooked up with their Crumplebottom cousins for a trip to the Little Cottage Park for the Summer Festival.

Jeanna was staying home to rest. “She’s pregnant,” Shanni confided in stunned excitement. “I can’t believe she wanted to have my baby. She never ceases to amaze me.”

Shanni might be elderly, but you wouldn’t know it to watch her behave. When Forest saw Ali walk into the park, he slipped away to talk to her, and Shanni took his place.

Every moment with her these days was worth enjoying.

You just never knew when it would be the last.

Forest was completely captivated by Ali. She was the most amazing creature he had ever owned.

The best part was that the spell hadn’t changed her at all. She was the same brilliant imagination and ambitious business mind. It was just that now, the sun rose and set in his eyes. He could talk to her for hours and never run out of things to talk about.

Sky saw them together, gazing into each other’s eyes, and she thought of Adam. As the water balloon fight broke up, she headed over, breathless and dripping, to join the conversation. “Hey there, Ali!” she quipped. “I’ve been seeing you around a lot recently, and I wanted to know your intentions toward my brother.”

“Nothing,” Sky said coldly. Wow, she really was a bitch. What did Adam see in her?

She stalked off and grabbed Hunter by the arm. “Come on,” she said. “We’re going roller skating.”

“*I*’m going to roller skate?” Hunter scoffed. “You have got to be kidding.”

Then he saw Miyuki Mai turn up with skates, and he changed his mind.

Ali had to head home, and Forest tried a bit of skating himself. He turned out to be better at it than either Sky or Hunter.

Charles and Veronica showed up, with freshly swollen tattoos to join in the last of the fun.

Hunter struggled a few times around the roller rink, and when he saw Miyuki take a break, he jumped at the chance to get off and talk to her. The excuse to take off the wheeled shoes of death was a great way to overcome his shyness.

Dang it, get your foot out of your mouth already! “I mean — are you going to prom with anyone?”

“But you’re going with someone else?” Hunter prompted despondently.

“I wish I were going with you,” Miyuki said, “but i just don’t like you like that. I can’t. You see– I was going to ask Alice Bookabet, but she already has a date.”

“Oh,” Hunter said. “Oh! I see. Yeah, I guess it wouldn’t work out.” He didn’t know whether to feel good that she didn’t laugh at him or embarrassed that he didn’t catch the hint earlier that she only liked girls.

“You should go anyway,” Miyuki said. “You don’t have to have a date to go to the dance. I’m going to go without one. You never know what might happen.”

It turns out that StoryProgression rolled Miyuki was gay, so poor Hunter’s crush was never going to work out.

I’m not sure why Charles’s new tattoo is not on the shot of him eating a snowcone. I could have sworn it was taken after his trip to the tattoo parlor.

Charles and Veronica both rolled wishes to get a tattoo at about the same time, so I thought it would be fun if they got matching ones as part of aging up.

I am very displeased with how the tattoo turned out on Charles, which I’ll probably fix with MasterController rather than making a plot item. It’s a really cute image, and it looks good on Veronica (need a pic), but apparently the tattoos only look good on that metal skintone at maximum opacity.

I haven’t seen anything in StoryProgression updates from Ariel in ages. I think she’s still seeing Puzzle, and now they’re living together. Apparently she doesn’t roll romantic wishes here either. But she REALLY has the hots for Charles. Heh.