We begin with the amazing three-headed horse of Avalon.

It really hates Jorani Wu for some reason.

Jorani is a Cambodian sim who I married to Zhan Wu’s Avalonian “nephew,” Zane Wu (read: the younger copy of Zhan Wu who I turned into an elf). They have made some very pretty babies. But that’s beside the point.

Speaking of Zhan Wu, I ended up with a fresh younger copy of him in Shang Simla at some point, and on this trip he became a paparazzi.

Here is the doppelgänger booing Veronica for woohooing in the academy shower with Charles.

Wu’s actual name as an EA-created stock character in World Aventures is Zhan Su. I misremembered it and used it wrong so many times that I just used MasterController to change name :).

Not sure if this was how the adventure mission was *supposed* to be, but Charles spent half a sim-day transporting messages between two members of the Order of the Resolute Fist who were in the same house. At the end of the mission, they walked into the same room and started talking to each other.

And the denizens of Shang Simla found both Charles and Veronica VERY attractive. This is Veronica with her Egyptian bathroom beau. 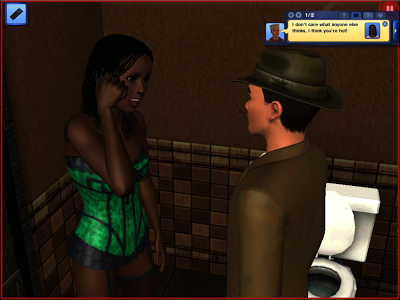 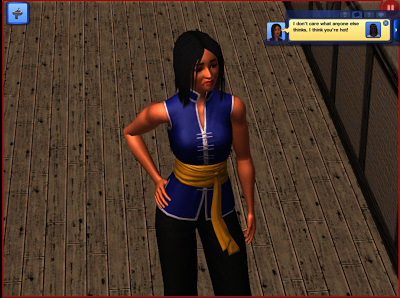 Right after woohooing with Veronica at the academy was probably the WRONG time for Charles to notice his attraction to a French tourist.

But the crowning moment was the special way he hit it off with the mummy.

Right before he killed him.

Becky Mentary Hodgins has discovered an amazing head for business. She’s bought up a bunch of local businesses and turned her family into real estate tycoons.

Echo Weaver just can’t get over Zhan Wu. I get a stalker message about her about every other day. She finally started dating a vampire named Ace Wilde, and they are now going steady — but she is STILL stalking Wu about as often as she goes out with Ace.

Let the trumpets blare from above! David Weaver-Doctor and Zuzu Weaver-Doctor have tied the knot! Zuzu seems to be my more emotionally stable simself. And she landed herself a Doctor Who :).

Lynn Sword had taken up with Doc U. Mentary! Maybe U can finally get on with his life after his ex remarried. Shortly after, they had a huge fight and broke up. Maybe her toddler son Hector had something to do with it.

Maya and Charmaine Ursine-Langerak have been having a rocky marriage, but now that they are expecting a child, maybe things will get better — or not.

The Butterfield-Callenders adopted a boy child named Ignatio. Very shortly after, they both died and left him to their foster daughter Emma Voss to care for. I guess Tam and Martin Luther were too much in love to face life without the other.

Zhan Wu also adopted a boy child. And thus Twallan fixed my demographic gap pretty well without me having to do anything.

The cutest couple award goes to Franco and Ceridwen Bookabet. They are adorable and very, very into each other.