When Charles got back to Sunset Valley, he hit the library for every book he could find on entrepreneurship. If he was going to open his own dojo, he wanted to do it right. He could earn his way as a fisherman, but that was unlikely to make anyone rich. Nobody taught Sim Fu in Sunset Valley, and a dojo had the potential to be a drag on the family finances or a career path that would allow him to make a difference in the community.

Everywhere he went, he had a book in hand. Even in the waiting room of the salon. He’d seen a picture in in one of his Sim Fu books that really inspired him.

Shanni was still out on maternity leave, so the reception he received at the salon was about what he’d come to expect.

He was pleased to note that one of the tattoo artists didn’t seem bothered at all.

Of course, she was the person he picked to do the work.

Charles showed her the picture and where he wanted it to go.

It didn’t really hurt that much, but maybe that was just another effect of being half-ghost. Afterward, he awkwardly tried to start up a conversation.

“Hey, I’m Charles. I was just wondering if you might want to go out for a drink sometime?”

“Well,” she said, “Honestly, my boyfriend might get the wrong idea.”

Ouch. Strike out. Next time, he berated himself, don’t be so forward.

At least he now felt uniquely prepared for this business venture. The tattoo felt like a sort of good luck charm.

(I apparently didn’t take a closeup of the tattoo. It’s a stylized Asian dragon that I downloaded from MTS. I kind of thought Ada might get tattoos, but it was Charles who wished for it while he was training in China!)

However, after some perusal of real estate listings, he discovered an old estate house on the edge of town. An old man had once lived there who was of Japanese descent, and he’d altered the place to suit his heritage. 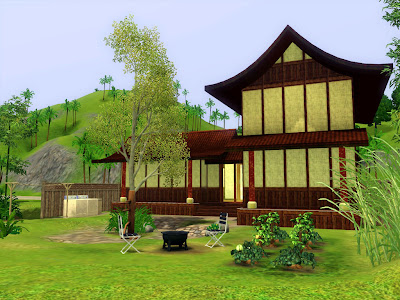 He died almost two years ago, and the family had put the place up for sale as-is and left it on the market with a slowly dropping price. Charles could use the family savings to buy it without taking out a loan, but just barely.

It was going to be a lot of work to fix up, though. It was musty smelling and filled with the old man’s forgotten belongings. 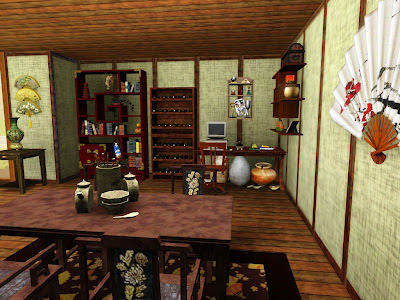 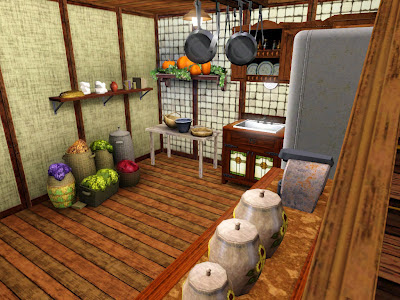 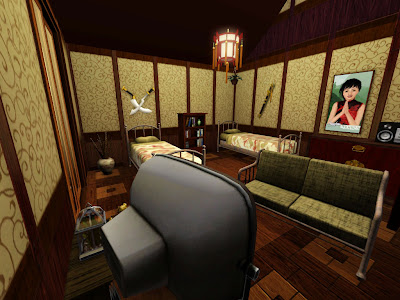 Charles took a deep breath and signed on the dotted line. This was a big risk, but he was determined to make it work out. He thought about Wu and wanted to make him proud. And Granddad. He always wanted to make Granddad proud.

The first thing he did was strip out the living room and turn it into a training room. 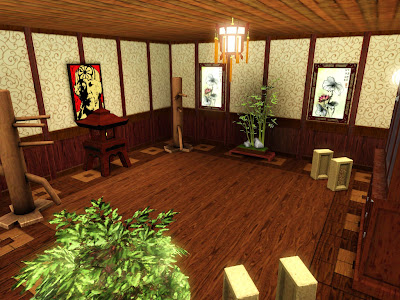 The upper floor he set off-limits for now, except for the bathroom, which did barely function. He would have to renovate as he went along.

He was ready to open the Spirit Sample Dojo.

He took out an ad in the newspaper and anxiously waited to see if anyone would show up. A couple of retirees, Malika Williams and Geoffry Landgraab, did make an appearance. And Adjo showed up to be supportive.

And Charles discovered to his dismay that the lights failed to come on. The circuits were blown, and he’d have to replace a lot of wiring. This place really was a fixer-upper.

(I thought the place had no light. But when I went to edit it, there were lights — they just weren’t coming on. Some kind of glitch with installing the lot, I guess. I had to replace them.)

Still, Landgraab gave it a pretty good go in the dim training room.

Charles was able to teach him a few things, but teaching turned out to be very hard. Setting appropriate drills and expectations for different ages and body types was even harder. Granddad had seemed to have no trouble with these things when he taught Charles the art.

Still, as the weeks went by, and the word got out, things got more encouraging. More people started showing up. He met all sorts of new people from the community.

Charles worked out the kinks in his teaching style, and he could really see his students start to learn and improve. It was a heady feeling.

Even Adjo, who’d mostly shown up to be a nice guy, caught the bug.

And did he ever.

Though he picked some very strange places to meditate.

The Spirit Sample Dojo was a success. Charles was elated. He was making it work!

Now he really could call himself a Master of Sim Fu.

The idea for this thread unfurled in my head essentially the way I wrote it on his trip to China. Sure, Charles is an adventurer, but I was annoyed that nobody in the hometown knew or could learn Sim Fu without Charles teaching them. So the town should have an Academy. Wait… since he’s the only guy with a high Sim Fu skill in town, what if Charles opened the dojo! It was a fabulous way to get an otherwise solitary sim out there being social.

Then Charles and Ada both rolled wishes to buy another business, and that seemed to seal it.

The dojo lot is Kensei Miyagi Dojo from MTS. Note the picture on the wall in the training room if you’ve seen the old 80s classic The Karate Kid :). All of the pictures with no sims in them of the house and its interior were taken from the MTS post. I was shocked and annoyed to realize I didn’t take any introductory pictures of the place. The creator didn’t take a pic of the outside. I will have to do that and put it in a future post.

Here’s the thing that DID NOT HAPPEN on the dojo’s opening day.

If you thought Adjo looked a little, well, chubbier than usual in his first appearance, you’d be right. Here he is going into labor.

After this, he went to the hospital and gave birth to Darrin, his and Toya’s third child and first son. And I turned off male pregnancy.