Upon returning from France, Dylan had all the photographs he needed to finish his LTW. If I were interested in actually moving anyone out of the household, I’d’ve made someone else heir. But Dylan is so friggin cute.

First, I had the photos in digital picture frames, and the LTW didn’t complete. World Class Gallery doesn’t give you any progress stats, so I was kind of panicked that it had A) glitched out, or B) required something obscure I’d failed do.

I pulled out all the pictures from the digital frames and put them on every available wall space. THAT did it. Whew!

This is Andria failing to use a shower in a can, but it counted for the photo collection. How do you fail to use a spray can?

I had a ton of fun with photography. Too bad you can’t get any action screenshots of taking photographs so that I could make it a more active part of the story.
And here we have some very confused wild horses.

Standing in the only place on this 10×10 lot where they fit.

Lounge Lizard gnome impales himself on a cornstalk.

Andria returns home from her wedding in style.

After the obligatory zombie attack at the reception.

Guess we’re done with the first dance, eh? Anyone have a chainsaw?

Speaking of zombies, don’t zoom in too close on the people generated for the big show venue.

The big show venue effect is AWESOME, provided you keep your distance.
Nemo is feeling his masculinity. I couldn’t help but laugh when I read about his new wheels.

Plum has really gone senile. Now that she’s an Elder, she presents flowers to anyone she’s attracted to. Or, possibly just anyone. And my flirtatious women ALWAYS ACCEPT THEM. You notice that Xia accepted flowers from Plum at Dylan’s wedding, right in front of Leah. That produced this wish. 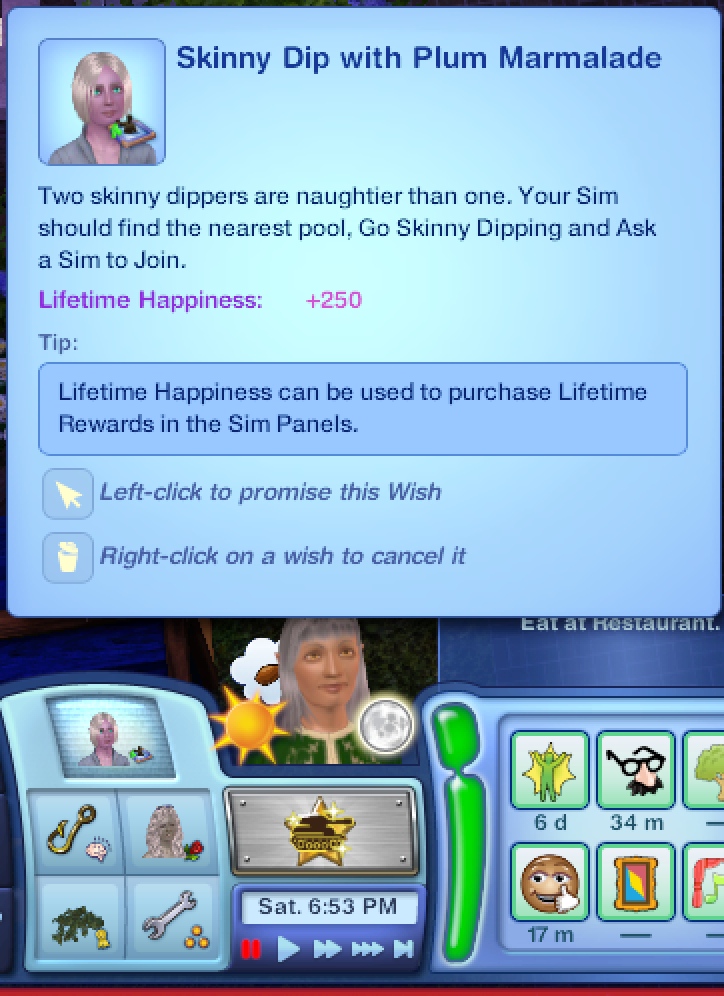 Moving on to the honeymoon, here is the creepy life of sim celebrities on vacation.

During some time relaxing in the hotel, Andia popped up this autonomous action. 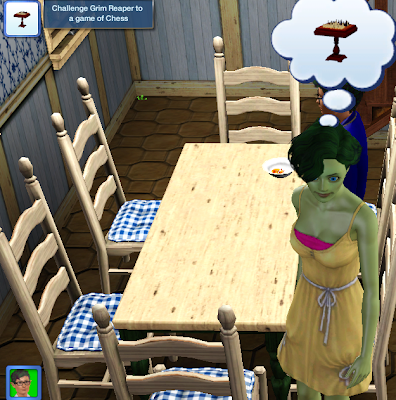 I waited and waited, but the action never completed.

So, what HAS been going on in the Avalon gossip column?

Not that much, really. Most of my SOIs (Sims of Interest) have either died of old age or are about to. I think it’s about time to emigrate Adjo’s entire-too-numerous descendants and do some new cross-pollination. I think the Wonders and the Stars could totally move to Avalon.

Mulberry Marmalade, now an Elder, dates every single female he can find who is younger than adult. This includes Anita Bookabet and Kate Pistachio.

Kate moves on to become the girlfriend of the geriatric and newly-widowed Darrin Ursine-Wu (this is Adjo’s only son).