I suppose it’s sort of fitting that a landmark post like this should be an introduction to the new world.

First, I introduce to you my Simselves:

All of those traits pretty much describe me :-p.

Why do I have two simselves, do you ask? Well, I put in a request with the DNA Request Team at thesims3.com, and while I was waiting, I decided to take a stab at it myself from the same photograph I gave them and compare the two. The first (Echo) is my effort and the second (Zuzu) is the DNA Team’s.

I think it’s striking how similar they are. People who know me in person say that Echo is a better likeness, though neither of them quite hit it. One friend said that she didn’t think that Echo looked like me but she could see a lot of similarity to my daughter, ha! Zuzu’s hair color is a very close hit to mine.

Oh, and who could forget our cat Mist

Who is Playful, Clueless, and Skittish, pretty much like her real life counterpart.

The Weavers are our playtest family for a brief tour of some Avalon public lots to be sure that the lots and Jynx rabbitholes are working properly. 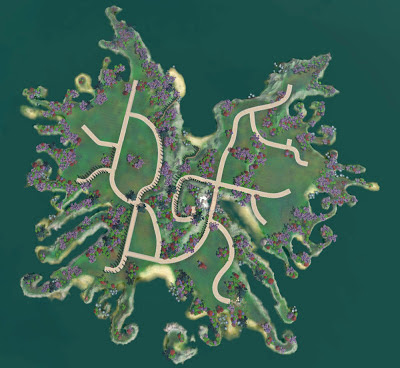 I should have taken one after I added all the lots, but I forgot. When I can play again, I’ll see about taking one.

Here are the sisters Echo and Zuzu more appropriate for Avalon:

These are the custom content ear sliders. Shortly after this playtest, the Supernatural patch came out, and I had to redo everyone’s ears in the entire town. Sigh. I don’t know why Zuzu’s ears are quite so large, but they’re smaller now.

Together they have moved in to Caramel Cottage.

Echo’s first wish, being an Artist, is to take a class in painting. I send her over to Avalon’s primary school, Chivalric Preparatory.

This is the charming lot School “Not So New” from ModtheSims. Beside it, you can see Honeyduke’s Sweetshop, which I have set up as a hangout.

Echo wanders through the door to stand on the Jynx rug

Meanwhile, some of the Marmalades dropped by to wander around the building.

The Marmalades get ears later. And eventually I notice that Grape Juice has a random hair of the wrong color and fix it. Sadly, it doesn’t happen during the playtest, so you’ll be stuck with brown and balding wherever you see him.

It occurs to me that this building has a lot of floors with a bunch of sort of random furniture on it. I’ve never really figured out the strategy that builders have in mind when they put together these complex furnished buildings to house rabbitholes. After this, I take out all the furniture and wall off the rest of the building. Then, I certainly hope, visitors will stay in the playground area outside, which is where you’d expect them to be outside of school hours.

*Poof* Echo’s done with her class.

She heads home. Muscadine Marmalade is pretty happy about it.

Meanwhile, Zuzu thinks about a career in crime.

She makes her way to the sinister Crypt Keeper’s Keep. Dark dealings are known to take place in the mausoleum there.

This doesn’t seem to be the right thing for her. Did you know that criminals do illegal things? She turns down the job offer and heads off to take a class in handiness.

At which point I get this message: 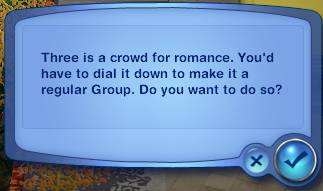 Seeing as Zuzu’s sitting alone with the cabbie and the only other sims she knows in town are her sister and cat, the implications are frightening. And Echo’s in a class right now. I’ve gotten this message a few times since then, and I’ve started to hypothesize that it’s actually being generated by some NPC action from Twallan’s StoryProgression. I should stop agreeing to dial it down and see what that does to some of the townie relationships.

Here we are at Tintgagel Fortress, home of the Avalon Home Guard.

Afterward, rather than head home, Zuzu decides to read a book on a random bookshelf placed for atmosphere. More stuff to strip from the buildings.

Alone in the house Mist is nervous.

She hides under the bed.

Echo emerges from the Mighty Pen Monastery, located in Camelot, where she just finished her writing class.

She heads from there

Across the courtyard to Camelot’s Great Hall, where she registers as a self-employed writer.

Across the street from Camelot, the Mentaries are visiting Faux Paw Dog Park, and Becky Mentary seems to be having some trouble.

I hope that doesn’t require surgery.

With her is her ex-husband and roommate Doc U. Mentary and U’s son Weston.

They stop to watch some pigeons flying through the park.

Zuzu has finally remembered that her life’s ambition lies in the science career, so she takes a cab to the Sufficiently Advanced Technology Center.

Just a quick pop into the magic carpet in the lobby

Zuzu now wishes to learn to play the string bass, so she heads to Chipping Simsburg, the town market, where she can take a class at the Excalibur Uniplex.

She heads into the theater to take her class…

And I return to Echo to find her still inside Camelot’s Great Hall.

Nemo Hodgins seems to be keeping her company.

After a few more attempts to get her out the door, Echo is still route-failing, and now she is joined by Grape Juice Marmalade, who also can’t get out and really wants to pee.

We seem to have found City Hall California. You can drop in anytime you want, but you can never leave.

While Echo’s waiting for me to fix the door to City Hall, Zuzu finishes her class and is eager to jam, so I send her to The Moon nightclub.

I have expanded the little DJ booth to accommodate a full band, and I want to be sure it works.

I finally get the bass shuffled around so that she can use it backwards.

But there’s no way to make the keyboard accessible, and anyway the guests are now trapped in the club.

Back to the drawing board on this place.

Mist is sick of being left alone in the house, and she makes her displeasure known.

Echo has escaped from City Hall California and decides to do some reading.

There’s a rusty bathtub on the grounds of a castle? Not sure I get that design logic. However, since I made the place Visitors Allowed, maybe I ought to actually provide real benches.

Echo heads to Monmouth Archive library, where she really hits it off with Ceridwen Bookabet.

Tam Butterfield-Callender drops by to peek in the windows, but apparently not to actually read.

Echo and Ceridwen both really like art! Yay! They should go to the Art Museum, which I have placed but neither named nor tested.

After this, Echo and Zuzu return home with bars in the red to pet their poor cat.

Town Update, from the playtest session and the first couple of days of actual play:

I wasn’t going to reveal the celebrities who I loaded into the town, but Ariel Hodgins is engaged to David Tennant! (The 10th Doctor from Doctor Who and my personal heartthrob. The three reboot doctors are currently living together as brothers Chris, David, and Matt Doctor.)

True to form, Ariel also moved out to her own place and adopted a cat she named Sebastian, which is making my life very confusing.

Becky Mentary immediately took up with the real Sebastian Hodgins. After a whirlwind courtship, the two quickly became engaged, though Becky was still living with her ex-husband U to help raise their children.

February Callender was also had the world’s shortest career as a Vampire. She was turned by the town Nesferatu and then defeated and turned back by the Slayer two sim-hours later.

Echo Weaver has fallen in love with and is now engaged to Zhan Wu. I guess she/I like older men, but how can I fault her taste??

Zuzu Weaver dated David Doctor for a while before he hooked up with Ariel and is currently going steady with his older brother Chris. Man, my simselves really are like me! But MAAAAN why didn’t she hold on to David while she had him??

Morand and Bella Bachelor Cagley gave birth to a son they named Freddy.

Laura and Alan Berg gave birth to a daughter Alexandria.

It’s one hour until Christmas as I post this, so MERRY CHRISTMAS if you celebrated it, and GREAT DAY if you don’t! Hee!

9 thoughts on “Simantics: A Playtest Tour of Avalon”